As we learn more about what goes on in the world beneath our feet, increased attention has been placed on soil organic matter.

And for good reason. While it only makes up a small percentage of most soils, the Sustainable Agriculture Research & Education (SARE) says it’s the “very foundation for healthy and productive soils” — and the more organic matter there is, the better the results.

Consider the following findings from SARE and the NRCS:

Farmers are witnessing the benefits of higher organic matter first-hand. When North Carolina corn yield champion Russell Hedrick increased his soil organic matter from 2.5% to 5.5% in six years, his water infiltration rate went from a max of 1 inch to 6 to 7 inches per hour.

Dr. Buz Kloot, an aquatic scientist and research associate professor at University of South Carolina, has witnessed this effect across soils in the state. The chart below shows data from an average of 2,155 samples taken in the coastal plain of South Carolina over the last three years.

With the region’s warm temperatures and high rainfall, conventional wisdom has always suggested that the challenge to increase soil organic matter would require an enormous effort for the farmer.

The good news is that it is possible to build up soil organic matter. Kloot has seen organic matter steadily increase every year by 0.1 to 0.2 percentage points on several farms in South Carolina, and he believes it’s possible for most soils to achieve around 3%, depending on soil texture.

The key to increasing organic matter, he says, is to follow and implement the NRCS’ principles of soil health — with the foundation of that strategy focused on growing a diverse mix of cover crops when land would otherwise be fallow.

The first principle is to minimize physical, chemical and biological disturbance to the soil, Kloot says, recalling Dakota Lakes Research Farm research manager Dwayne Beck’s comment that “tillage is a catastrophic event in the soil.”

First, it “slices and dices” all of the beneficial microbes present — including “good guy” fungi, protozoans, nematodes and microarthopods — and destroys the habitat for them. It also creates soil compaction and stimulates weed growth.

He notes that weeds typically aren’t interested in forming mycorrhizal relationships in the soil, because their goal is to grow quickly, spread their seeds, die and get another generation of weeds out there.

"You’re also killing microbes, so microbes like R. strategist, which thrive in disturbed soils, exploit the fact that you’ve got that carbon that was 5 or 6 inches down up to the surface,” he says. “It’s going to eat anything that is carbon based and basically turn it into carbon dioxide, thereby reducing soil carbon, and by definition, soil organic matter. So anything dead it’s going to decompose pretty rapidly and turn into CO2.”

This is why farmers will typically see a yield bump when they first till, but after a couple years the soil won’t perform as well due to less carbon available for consumption by the microbes.

The second principle is to keep the soil covered all the time, which can be achieved by leaving crop residue, but preferably by having a growing canopy of cash crops or cover crops — the third soil health principle.

Kloot believes that cover crops are the biggest component in increasing organic matter.

In November 2013, he began working with five farmers (on five fields, 13 management units, making up around 50 acres in three counties) on the coastal plain of South Carolina, to increase their soil organic nitrogen with cover crops in order to cut back on their nitrogen fertilizer needs. Whenever these growers did not have a cash crop growing, they were growing a cover crop mix that contains at least four species.

After the first year, soil tests showed that organic matter had grown between a 0.1 to 0.2 percentage point, which Kloot admits took him by surprise, given the narrative that it was not possible to build organic matter on the coastal plain.

In another study where Kloot and his graduate student, Gabe Kenne, looked at 438 soil samples taken in two counties in South Carolina in the falls of 2015 and 2017, organic matter increased from an average 2.14% to 2.23%.

“That doesn’t sound like much, but it’s statistically significant and it’s taken off of working farms where the farmers do their best (but don’t always make it) to keep cover on the ground year-round,” Kloot says.

In addition to organic matter increasing, Kloot discovered that nutrient levels and pH on the five farmers’ soils were quite stable — remaining practically unchanged, despite being in full production and not having any commercial fertilizer applied, except for nitrogen to grass crops, which Kloot says was typically applied at lower rates.

As of April 2018, the average percentage of soil organic matter for the research project had increased 41% since November 2013, from 1.2% to 1.6%. In that same timeframe, one farmer in a sandy loam soil raised his average organic matter levels from 1.9% to 2.5% without any manure, while another working in a loamy sand soil saw his levels increase from 1% to 1.5% where two applications of chicken litter were applied.

Jack up your diversity

While having living roots in the soil year-round is critical to improving organic matter, Kloot points out that it’s the diversity of crops that makes a big difference. Diversity is also the NRCS’ fourth principle of soil health.

Kloot says that while species like grass crops tend to bring more carbon into the soil because they have more biomass, continuously growing grasses without any additional diversity will cause productivity in the soil to go down.

In the case of the five farmers he’s been working with, some have increased the diversity of species in their soils by a factor of two or three, he says.

“Some of our fields in a 3-year rotation are going to see 14 different species. Three or four cash crop species and then up to 8 or 9 different cover crop species,” he explains.

Most farmers think of only using cover crops in the fall and winter, but Kloot says summer is also a time where growers can add a little more diversity to their soils in a short period. He knows one farmer who decided to grow a mix of sorghum sudangrass, sunn hemp, daikon radish, sunflower and cowpeas right after his corn crop, before planting winter wheat. That mix produced 8,000 pounds of biomass in the two months it grew.

“You had all these heat units from the summer sun, and instead of spending money on two passes of herbicide to keep pigweed and morning glory down, that summer cover crop completely covered his field,” Kloot says. “We saw again our nutrients were preserved and pumping the ground full of carbon.”

He explains that whenever there is a living crop — cash or cover — the organic matter that comes from it is not just the product of decomposition.

“Up to 40% of any kind of plant is carbon going into the soil in the form of root exudates. Those root exudates are sugars and proteins, and those things are going to attract microbia around your root zone or your rhizosphere, and that is part of what’s building up this organic matter.” 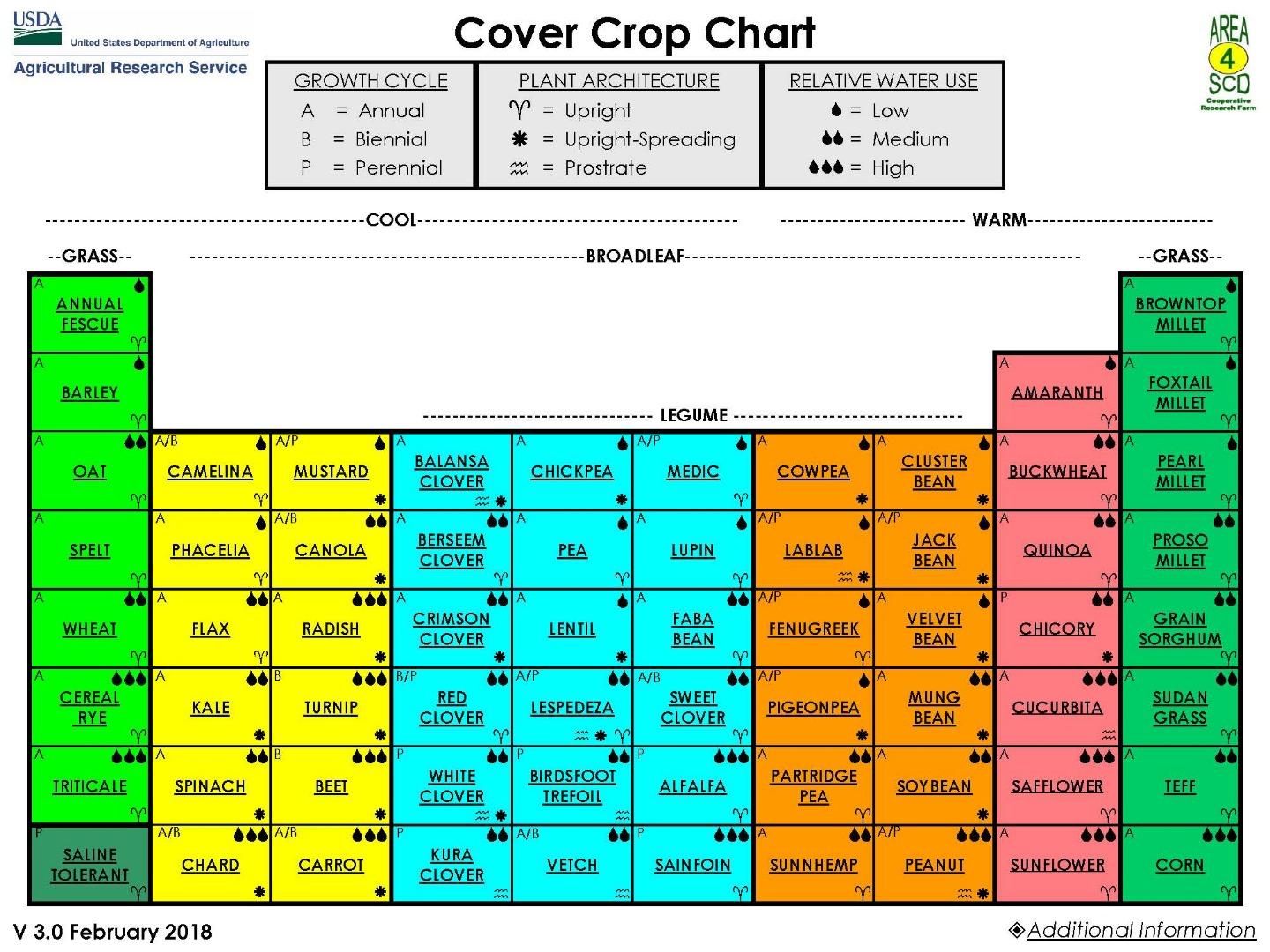 Patterned after the periodic table, the Cover Crop Chart allows farmers to learn more about each individual species and compare them against one another. Photo credit: USDA ARS Northern Great Plains Research Laboratory: Mandan, ND.

“So jack up your diversity,” Kloot says, “and the easiest way to do that is to jack up the diversity in your cover crop mixes with five, six and seven-way mixes.”

While focusing on soil organic matter is important because you can track its progress, Kloot says it’s more of a proxy for biological and ecological things happening in the soil — an indicator that the soil is moving in the right direction. But the goal of increasing organic matter should be accompanied by improved soil structure.

“Organic matter is a good proxy,” he says. “It’s nice you can read it and go back year after year. But really it’s about improving soil structure.

“Soil structure is the way your soil is held together. In other words, do you have critter holes, do you have root holes? Does your soil surface look like cottage cheese? Do you have breaks in the soil? Do you have pore space where air and water can move thoroughly? When you have soil structure, which is developed through growing plants and adhering to these principles, that is when you can see things really take off.”

Soil structure is also what makes the soil more resilient to extreme conditions, which in some cases may be the difference in turning a profit and losing money.

“No matter where you’re located you’re going to see weather extremes, and part of the whole soil health thing is to help the farmer to withstand these extremes, so you’re making your soil more resilient,” Kloot says. “It might be your corn crop holds on 2, 3, 4 or more days in a drought situation. If you can put yourself in a position where your crop holds on for another few days, it might be the difference between a crop failure and a crop that might still make you money.”

While trying to implement all of these principles may seem overwhelming, the most important thing a farmer can do is start.

“You don’t have to do this on all your land,” Kloot says. “Take the worst land you have, start cover cropping it. If you haven’t made any money off of it, cover crop it twice. And then go back and see what it does.”

As we learn more about what goes on in the world beneath our feet, increased attention has been placed on soil organic matter.And for good reason. While it only makes up a small percentage of most soils, the Sustainable Agriculture Research & Education...