There is a stretch of interstate that runs crooked across the center of the US Midwest, connecting the rust belt region of northeast Ohio to the lands just beyond the Appalachia in central Kentucky.

I-71. It is a road I know well, having traversed it as many as a dozen times or more per year doing my master’s work that took me from northeast Ohio to central KY for school. It is a road that gives a glimpse into the past, present, and future of the nation, as it quickly moves from some of the densest urban areas to some of the least populous, early 1900s farm-esque around.  Sometimes, all this takes place in just a few minutes or miles.

Countless farms of all kinds sit within just a few miles of this corridor . One is Sweet Grass Dairy,  just a stones throws off the interstate. This is a farm that in just a few years has experienced a great deal of what dairying in America puts dairy farmers through. Our next few articles will explore Sweetgrass Dairy and the young family - Jacob and Elizabeth Coleman and their five kids - that are trying to keep the dairy dream alive.

Not your typical dairy farmer

If you had meet Jacob Coleman as a kid, you wouldn’t have put money on him one day becoming a dairy farmer. Dairy is a dying industry in the US. In states like Kentucky, over 80% of dairies have consolidated or closed in about a single decade. Similar stats describe the situation around many other states.

Jacob’s parents certainly didn’t see farming in their son’s future. Jacob’s dad was a tech sales person. Their ties to farming ran only as deep as having a preference for semi-rural living. But this small choice to live a country life would open the door to Jacob’s opportunity to become a farmer later in life. The tractors and farm equipment intrigued him as a young boy living fenced in by farms in Thorntown, Indiana.

At fourteen, when his family moved back to Indiana after a brief hiatus elsewhere, Jacob's break came. The local 4H was big in his area, and one farm in particular had a program geared especially for kids. The farm happened to sit just three miles down the road from Jacob’s home. It wasn’t your typical farm either.  It was a New Zealand style, grass based operation ran by Charlie Carter. Carterly farms would have as many as 50 kids leasing dairy cows to show at the fair through the farm and 4H program. Farming plus such heavy community investment left Charlie a busy fellow.

Jacob asked if he could work for Charlie and scored his first farm job - pulling thistle and dock from the pastures. He threw himself into it with as much passion and energy as if he was playing in the Superbowl. When he was done with his work, he would hang around the milking parlor and other parts of the farm, learning about rotational grazing, milking, and cow care.

Pretty soon, the tech dad, sixteen year old kid was managing the pastures and milking for a 100+ cow dairy herd. Charlie had a right hand man he could trust to take care of some of the farm’s major operations, freeing him up for other farm projects and pursuits. Jacob was living his dream and dreaming about when he could start a farm of his own.

But waiting wasn’t in his blood, so while  overseeing the dairy herd and going to school, he converted his family’s four acres into his first operation. Pastured poultry was his first enterprise, inspired by Charlie’s fifteenth birthday gift - Joel Salatin’s “You Can Farm!” He also found four acres sufficient space to dabble in pasture raised beef, getting two steer's from Carterly to moo instead of mow the family's large plot of land.

Jacob’s parents indulged their son’s dreams, hoping that this stage would pass and that he would settle into another, more suitable career like law or medicine. Even Charlie encouraged him to attend college and broaden his horizons before settling down to farm, thinking that such experience may well change the young man’s mind.

To College and Beyond

As graduation approached, Jacob faced continued pressure to attend college. He figured he would create an impossible set of requirements to ensure higher education didn’t derail his farming aspirations. He would go to any school that


He figured that this combination would keep his parents and Charlie stumped. Little did he know that just such a college existed - the College of the Ozarks located in Point Lookout, Missouri. Jacob applied, was accepted and soon found himself a few hundred miles from home, pursuing a dual degree in ag business and animal science.

At the time, College of the Ozarks was built around students working to pay for tuition. Jacob found a perfect fit on campus -  working on the school’s farm, particularly the dairy operation.

While in college, Jacob pursued all sorts of employment opportunities and other, entrepreneurial ideas - a bread baking business, a portable photo print shop so he could take pictures of couples at college events,  an employee at a landscaping company, a bicycle shop, house sitting. But after all this, he still wanted to stick with just one thing - farming.


After college, Jacob tried to find fitting farm work in Missouri. When nothing panned out, he moved back to Indiana and in with his parents. He chased down odd farm and other work here and there while trying to find a break or good fit for his farming goals and dreams.

In the meantime, his mom had other plans, and began to gently badger her single son about his single status and lack of any suitable prospects in their small community. So, Jacob decided to expand the scope of his search, partly out of true interest in finding a solid wife and partly to appease his mom. So, he opened an account on E-harmony and began wading through the daily options it presented. 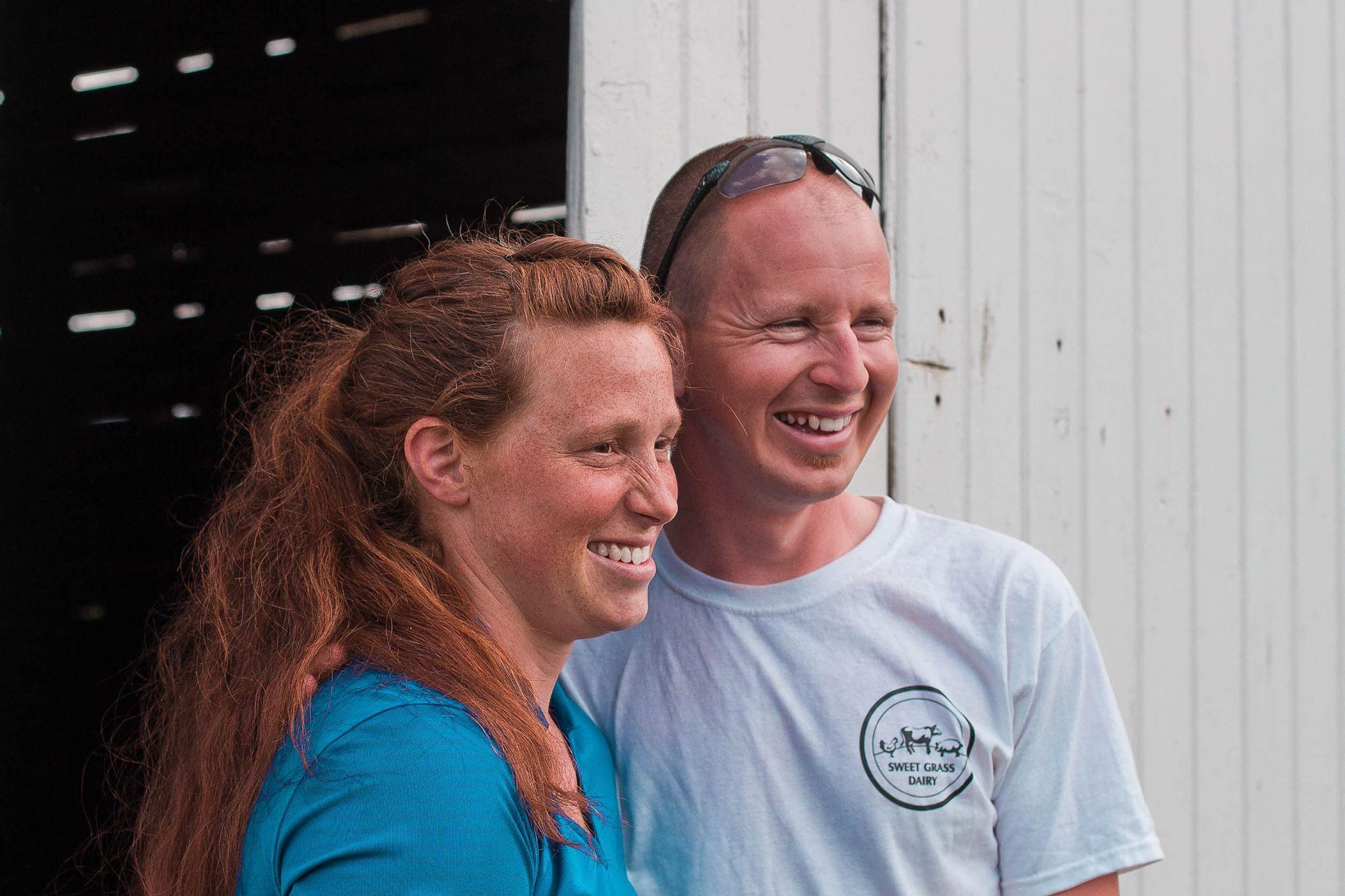 With just three days left on his six month subscription, someone of possible interest finally popped up - Elizabeth,  the daughter of a dairy farmer in Pennsylvania. The timing  worked well for e-harmony and Jacob - E-harmony got a few more months subscription and he found his eventually wife.

After three months of phone calls, emails, and other methods of distance communication, Jacob received an invite to join the family for Christmas. He turned it down, since he had a full schedule of work already set for the month. But his work then all fell through, freeing up his schedule.  A few weeks later, he found himself meeting Elizabeth and her family in person in PA. The relationship continued to blossom.

Thirty days before the wedding, Jacob moved to Pennsylvania, not just to be joined to Elizabeth in marriage, but also to take on some of the duties at the family farm she was an integral part of.

Originally, Jacob and Elizabeth took their duties at the family farm with the intention of the operation being handed over to them in the coming years. Her parents had shared their desire to step back and start to retire from the difficult life that dairying entails. For the past decade, the challenges and costs of dairying had increased while the potential profits had tanked.

The tanking profits were especially problematic for the young married couple. While the farm did dairy, it also did a number of other, far more profitable and less volatile profit wise row crops. This is where the parents made their money. Jacob and Elizabeth were paid out of the milk check. As conventional dairy prices plummeted,  the check got smaller and smaller. So did their pay. Pretty soon, they realized that the local McDonald's would offer them more financial opportunity than a life spent in conventional dairy. They would also get the occasional day off to boot.

So, the young couple began to pray and plan for a change. They weren’t ready to give up on farming just yet. For Jacob, it had haunted his dreams since he was a small child. For Elizabeth, it ran in her family’s blood for many generations. They wanted to find a place where they could express their ideals and ideas for how and what a farm could and should be.

The Coleman's started searching. Unfortunately, they had a few problems to overcome. Well, really one problem. Finances. Young married couples generally don’t have deep pockets. The price of farm land had soared over the two decades from Jacob’s childhood to college graduation. A couple with a below minimum wage history, a few kids on the way, and little capital wasn’t exactly what banks were looking for in ideal loan customers, either. It looked like to stay in farming, the Coleman’s would need a mighty break to make it possible, especially to get into dairy.

They would find that break in the not too distant future. The second part of this series will be available soon, only on Agfuse.

About the author - John Moody and his family live in Kentucky on their 35 acre farm/homestead, with their pigs, occasional cows, rabbits, chickens, and various vegetables.  John speaks across the country at various homesteading and farming conferences, along with writing for numerous publications, both print and online.

You can pre-order a copy of his forthcoming book, The Frugal Homesteader's Handbook with foreword by Joel Salatin directly from John here  or on Amazon,

There is a stretch of interstate that runs crooked across the center of the US Midwest, connecting the rust belt region of northeast Ohio to the lands just beyond the Appalachia in central Kentucky. I-71. It is a road I know well, having traversed it as...