An Introduction to Augmentative Biocontrol 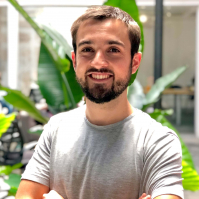 In the previous article in this series we discussed classical biocontrol, which is the practice of identifying the origins of pests found in local fields, then finding the natural enemies of those pests in their foreign origins and bringing the “enemy of my enemy” (otherwise known as “beneficials”) back from their homelands to local farms to renew old rivalries and help suppress pest populations. As we have seen, this strategy is usually coordinated, or at least regulated, by public organizations at a regional, national or even continental scale.

But a lot of the pests damaging our crops are actually native to our regions and already have local natural enemies. The problem though is that the population of those control agents is often insufficient and on the decline, for various reasons, some of which we will discuss in an upcoming article. To highlight a few of the most common causes though, industrial farming techniques such as monocropping and the use of phytosanitary products can affect populations of beneficial insects.

When existing natural enemies populations dip, growers who implement biocontrol as part of their Integrated Pest Management plan can re-release beneficials on a regular basis instead of using pesticides. This technique of bolstering existing beneficial populations with mass-reared insects is referred to as augmentative biocontrol and presents many advantages compared to the use of chemical applications. For example, unlike the use of broad-spectrum pesticides that can affect the natural enemies population and thus could encourage future pest outbreaks, augmentative biocontrol is often an ideal long-term solution.

Additionally, growers are facing pesticide resistance issues which force them to look for alternative pest control strategies. The release of biological control agents is often a more sustainable solution in the short and long-term. Another argument (among many more) in favor of augmentative biocontrol is that sprayed chemicals often cannot reach some pests such as spider mites which tend to stay sheltered on the bottom side of leaves, but natural enemies have no problem finding them there.

As we described in previous articles, the goal of biocontrol is not to eradicate a pest from the farm, but rather to ensure that there is the right balance of natural enemies and pests, so that the pest population is kept under acceptable thresholds. The two primary thresholds to consider are the least number of insects that cause yield loss equal to pest management costs (economic injury level, or “EIL”) or, preferably, the pest density at which action should be taken to prevent populations from reaching the economic injury level (economic threshold, or “ET”).

The primary principle of augmentative biocontrol is to use periodic releases to ensure that there is a large enough population of natural enemies (the ET) to prevent or control major pest outbreaks (the EIL).

Augmentation can be further segmented into inoculation and inundation, depending on the frequency of release.

Inoculative augmentation is when a release of beneficial is made on the crops once during the season and the control is ensured for the rest of the season by their offsprings.

Inundative releases are planned when the pests are only controlled by the released beneficials themselves since future generations generally don’t survive to control future potential pest outbreaks. In that case, more frequent releases are necessary over the season.

Numerous pests are successfully controlled within fields growing a wide variety of crops around the world. Crop examples include permanent crops such as vineyards, citrus and apple orchards as well as annual crops such as strawberry, cannabis, and corn. Controlled pests include whiteflies, thrips, aphids, and mites by using either predators or parasitoids depending on the target. One common example in California is controlling the populations of two spotted spider mite (Tetranychus urticae) in strawberry crops by releasing a beneficial predator mite, Phytoseiulus persimilis. This mite is released three to four times per season to establish a sufficient population, which, once established, can control twospotted spider mites for the rest of the crop cycle – roughly six months. Another famous augmentative biological control use case is the release of the parasitoid wasp “Anagyrus pseudococci” by the growers in the Coachella and San Joaquin Valleys in California as part of their IPM programs to control the vine mealybugs.

If you are wondering about how to start using these control agents, rest assured you will not have to rear the insects yourself. Several companies specialize in the mass production of beneficials, from home breeders to multinational corporations, such as Koppert or BioBee. Your PCA or a local entomologist should be able to recommend one! 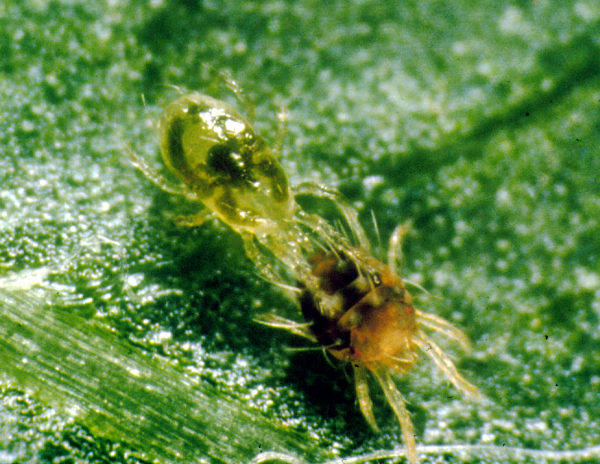 Most of augmentative biocontrol application techniques require field workers to manually release the beneficials directly on the crop or soil. This can be a time-consuming process, and meeting required application timing can be tricky for larger fields. Luckily, if pest populations are anticipated to grow but are not yet sufficient to sustain a larger beneficial population, some beneficials can be released into fields a bit early by using containers or bags that provide some nourishment. Hopefully, this lasts until they can live off pest populations, but some level of loss should be anticipated.

As you may be beginning to realize, while biocontrol has tremendous benefit, the traditional techniques face a few challenges: field/terrain conditions or crop height may prevent a manual release, there is a big opportunity cost for not using limited labor for other tasks, there is commonly a lack of precision in the release of the beneficials, and timing can be critical.

However, there is good news to report. New dispersion techniques have been developed, tested and now are becoming increasingly available. Some, like hand-held blowers, are an incremental improvement of current manual releases. Others, such as the drone-performed biocontrol provided by our company UAV-IQ Precision Agriculture to growers in California, make the release of beneficials possible at scale for a growing number of crop types. In an upcoming article, we will describe in more detail the different release methods for augmentative biocontrol. We will discover that while augmentative biological control was historically known mainly for greenhouse vegetable and floriculture production, these new technics open new opportunities for outdoor crops such as trees, orchards, vineyards, etc.

In our next article, we will focus on the last strategy of applied biological control discussed in this series: conservation biocontrol, but before then we’d love to hear from you about whether you’re finding these informative and if you have any suggestions for future articles.

Do you have any experience with augmentative biological control? Share your story with us and fellow growers in the comments!

An Introduction to Augmentative Biocontrol

In the previous article in this series we discussed classical biocontrol, which is the practice of identifying the origins of pests found in local fields, then finding the natural enemies of those pests in their foreign origins and bringing the “enemy...

Planting faster, more efficiently and with started plants – not seeds

From Industrial Pesticides to Integrated Pest Management: A New Trend in Vineyard Practices

This article was initially published on The Wine Industry Advisor as part of a s...