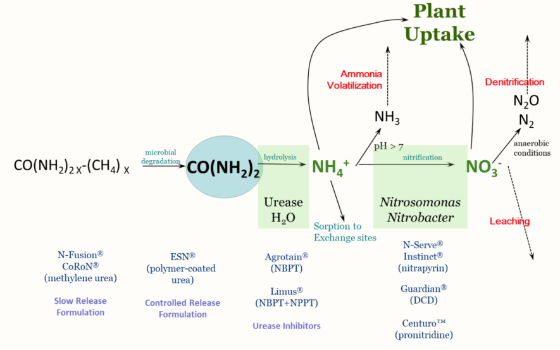 When it comes to fertility in crop production, nitrogen is one of the most critical nutrients involved. “Nitrogen plays an important part in many essential functions and compounds necessary for life,” says the University of Missouri Extension and can be found in various parts of plants.

Unfortunately, nitrogen fertilizer is susceptible to leaving the soil before it can be used up by the plant. According to Cornell University Cooperative Extension, nitrogen loss can occur in three ways:

Urease inhibitors prevent urease from converting into ammonium, while nitrification inhibitors are actually a pesticide that kills a specific group of nitrifying bacteria that are responsible for the conversion of ammonium into nitrate.

While these products can help protect your nitrogen from loss, are they worth using on your farm? More importantly, will they pay off?

University of Nebraska Extension Soil and Nutrient Management Specialist Charles Wortmann says that like most practices in agriculture, you can’t expect universal benefits from use of nitrogen stabilizers, but it can be very beneficial if it’s well targeted to certain situations.

The University conducted a near three-decade study on N-Serve, a nitrapyrin nitrification inhibitor, that was applied along with anhydrous ammonia in the spring on an irrigated, continuous corn field with silt loam soil near Clay Center, Neb. Researchers found use of nitrapyrin produced a positive yield response 36% of the time, which only occurred when weather in the 6 weeks following a nitrogen application included moderate-volume, well-distributed rainfall, or higher-volume rainfall coupled with higher temperatures.

The inhibitor didn’t affect yield in 46% of the years, while there was a negative yield effect18% of the time.

Wortmann thinks the results were highly affected by soil texture.

“If it was a sandy loam, loamy sand or sand, we would have expected it to be more beneficial,” he says, explaining that there’s a greater risk of excess water moving through the soil, especially in May and June. Those two months have the highest leaching potential because there’s more rainfall and the crop isn’t using as much nitrogen at that point.

He says the results from the study tell us that we shouldn’t expect many benefits from the nitrification inhibitor with spring-applied nitrogen for a silty loam soil, silty clay loam soil, or any soil that’s finer textured. The one exception, he adds, would be where there’s a moderate or high due to waterlogging.

“In low lands that are occasionally flooded and waterlogged, a nitrification inhibitor could help prevent loss of nitrogen due to denitrification,” Wortmann says.

Soil type isn’t the only influence on the effectiveness of nitrogen stabilizers. Because the weather is often one of the driving forces behind lost nitrogen — whether it’s high rainfall that can lead to leaching, or dry weather that can cause volatilization — paying attention to the forecast can play a big role in whether a stabilizer pays off.

The company tested three products — Instinct, Agrotain Plus, and Nutrisphere-N — on its central Illinois, central Indiana, Kentucky and Ohio sites. The products were surface-applied before corn emergence with 180 pounds of liquid UAN.

They found that across the four sites, the products all provided yield increases and positive returns on investment. Instinct, which delays nitrification but not volatilization, was the top-performing product of the three. Beck’s Hybrids researchers believe this was due to frequent rain events all of the sites experienced throughout the 2014 season.

What About Slow-Release Nitrogen?

In addition to nitrogen stabilizers, another product option are slow-release fertilizers, which help reduce nitrogen loss by limiting how much nitrogen is exposed over time.

The University of Nebraska conducted a 3-year study on ESN, a polymer-coated urea, on an irrigated corn field with loamy sand soil in south-central Nebraska.

Researchers saw positive results from using ESN over UAN with and without stabilizer at various rates. Averaged across the different rates, corn yield with ESN was 49% greater over unstabilized UAN. In one year there was a very small rain shortly after UAN application sufficient to activate urease, but then it didn't rain again for another two weeks, resulting in much ammonia volatilization. The polymer coating of ESN prevented urease access to the urea.

A lab study simulating field conditions found that ESN compared with unstabilized UAN reduced ammonia loss by 15% with dry soil conditions and leaching of nitrate by 60%.

However, Wortmann warns that while the study was good in testing the effectiveness of slow-release products, it’s not the type of nitrogen management farmers should be following for an irrigated sandy loam. Less nitrogen should be applied early, he says, with most applied in-season, such as through fertigation.

Does Tillage Make a Difference?

With the nitrogen in these studies being surface-applied, does it make a difference what tillage practices a farmer uses? It can.

In the 28-year Clay Center study, the site had both no-till and disk tillage. Researchers found no difference in the effects of nitrapyrin due to tillage.

Wortmann says that when they sampled for accumulated nitrates in the vadose zone to about a 30-foot depth, there were less nitrates under no-till, but researchers couldn’t find a good explanation for that. He suggests it’s possible that with a better water infiltration under no-till conditions, the nitrogen could have leached deeper than 30 feet under no-till, or it may have been lost through denitrification. Either way, the yield was not any greater.

Which is why Wortmann recommends if you’re no-tilling and you’re going to surface-apply urea or UAN, you consider using urease inhibitors, including for corn after soybean.

“Unless the weather forecast gives them a strong indication of rain or they’re planning to irrigate,” he adds. “For in-season, whether it’s applied with a land applicator or through the irrigated system, then I do not see a significant advantage to using the inhibitor.”

Deciding When to Use Nitrogen Stabilizers

Unfortunately, because weather is often the biggest factor in whether a nitrogen stabilizer pays off in a season, it’s hard to predict when it’s wise to use them, and when they’ll be a waste of money.

“A lot of it is targeting,” Wortmann says. “You have to think about your situation, both your field and your anticipated weather, and decide from there.”

In situations where you’re surface-applying urea or UAN, especially in no-till fields where there’s crop residue, then the economics might be favorable, he says. “We don’t have enough data to see how frequently we get these losses.”

Conversion of ammonium to ammonia is also more rapid on soils that have a high pH or are calcareous.

“Urea application to wheat in spring, I would say that would be a good time to use it. If it’s a rain-fed area, in case the rain comes,” he says.

Wortmann adds that if the forecast indicates no rain for 10 days, then he would recommend a urease inhibitor to inhibit volatilization loss.

In very sandy soils, even at relatively small amounts, if it’s applied pre-plant in the spring then he suggests inhibitors be routinely used.

“With fall application, it may do some good but very often the effect of the inhibitors is gone by the time we have our highest leaching potential, which is again in March, and probably through May and June,” Wortmann says. “It should be very much discouraged anyway of nitrogen to sandy soil in the fall. But spring application, even if you’re putting on less than 50% of your total nitrogen, you might as well protect that.”

When it comes to fertility in crop production, nitrogen is one of the most critical nutrients involved. “Nitrogen plays an important part in many essential functions and compounds necessary for life,” says the University of Missouri Extension and can...

It seems like every spring the same thing happens. Many people attempt to predic...