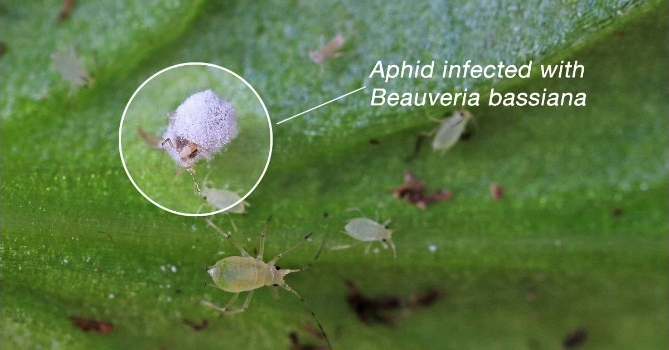 Beauveria Bassiana fungus is a fungus that grows naturally in soils around the world. Acting as a parasite on various arthropod species, causing white muscardine disease; It widely used as a sprayed biological insecticide to control a great many pests such as bed bugs, termites, thrips, whiteflies, aphids, and different beetles.

Once Beauveria Bassiana infects the host insects, the fungus grows fast inside of the insect’s body. Feeding on the nutrients present in the host’s body and producing toxins continuously.

Beauveria Bassiana is a pathogenic fungus. Applying under suitable environmental conditions, it can be subdivided to produce the spores. After the spores are in contact with pests, they can adhere to the epidermis of the pests. It can dissolve the outer shell of the insect and invade the host body to grow and reproduce.

It will begin to consume lots of nutrients in the body of pests and form a large number of mycelium and spores inside the body of insects. In the meantime, Beauveria Bassiana also can also produce toxins such as Bassiana, Bassiana Oosporin, and Oosporin ​, which disturb the metabolism of the pests and eventually lead to death.

Beauveria Bassiana is a microbial fungicide, which mainly kills pests through parasitic reproduction. Therefore, it can be used continuously for many years without drug resistance.

Beauveria Bassiana is a microbial fungus that only acts on host pests. No matter how much concentration is used in production, there will be no drug damage, is the most assured insecticide.

(4) Low Toxicity And No Pollution

Beauveria Bassiana is a preparation produced by fermentation. It has no chemical components and is a green, safe and reliable biological pesticide. It has no pollution to the environment and can improve soil conditions.

There is no shortage of great apps to help farmers in 2020. As farming gets more...

Importance of healthy rootsFirst, they anchor the plant in place, resisting the ...

How to get rid of powdery mildew on rose？

Rose ,so romantic and lovely.It is really a pleasure to plant roses.Today when y...