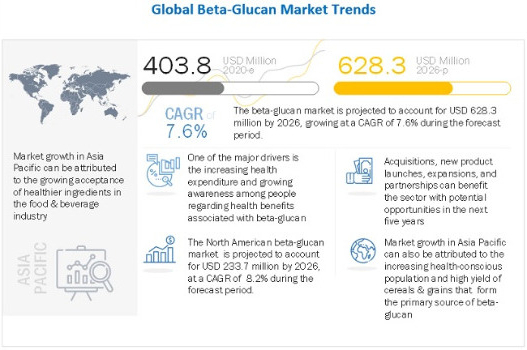 The beta-glucan market size is estimated to account for a value of USD 403.8 million in 2020 and is projected to grow at a CAGR 7.6% from 2020, to reach a value of USD 628.3 million by 2026. Factors such as the increasing research on beta-glucan, clubbed with its functional benefits has been the key areas that has supported the market growth of beta-glucan. Moreover, there is an increase in the application of beta-glucan in fast-moving industries, such as food & beverage and pharmaceuticals due to its health-promoting and prebiotic properties that has also helped in the growing demand for the market. It is also used across other application areas such as nutraceuticals, cosmetics, personal care, and animal feed.

The North American beta-glucan market is led by its broad applications in various products along with their health benefits. The key market players in the North American beta-glucan market include Cargill (U.S.), Millipore Sigma (U.S.), and Lesaffre (U.S.). Technological advancements have made beta-glucan available for a wide range of applications in the food & beverage sector in the form of thickening agents, fat substitutes, dietary fiber, and hypocholesterolemia agents; these are likely to drive the growth in the region.

In addition, the US has a large market for bakery, confectionery, convenience food, and packaged food products, and hence, it accounts for a major share in the market. Consumers in the US are calorie-conscious, due to which low-calorie and low-fat food products are popular in the country. The increase in the prevalence of obesity and cardiac diseases has led to a surge in demand for natural and low-calorie ingredient-based food products among consumers. According to the Centre for Disease Control & Prevention (CDC) and from the data provided by National Health and Nutrition Examination Survey, in the US, the prevalence of obesity was 39.8% and affected nearly 93.3 million of the adult population between 2015 and 2016.

By application pharmaceutical and food & beverage will be the key areas to drive the demand for beta-glucan, in terms of value

Pharmaceutical products come in the form of capsules, liquid, powder, or tablets and are taken to balance the deficiencies of ingredients in diets and for curing problems, such as obesity, blood pressure, and diabetes. These products have been extensively studied for their immunological and pharmacological effects. Immunologically active, homogeneous, non-aggregated, and micro-particulate beta-glucan is prepared from saccharomyces cerevisiae which has resulted in growing applications across the industry. Moreover, the rising sedentary lifestyle and increased consumption of calorie-rich food, have caused numerous health problems, such as obesity, high blood pressure, high cholesterol, and heart attack. The intake of beta-glucan has helped in reducing the risk of these health problems with its health-promoting properties further driving the beta glucan applications

Soluble dietary fibers also reduce the total plasma cholesterol and lower the glycemic index of food providing numerous health benefits. Insoluble beta-glucan is found in larger amounts in cereal, such as brown rice. Wholemeal flour and bread, wholegrain breakfast cereals, brown rice, corn bran, and wholemeal pasta are all good sources. This type of fibrous beta-glucan is vital for a healthy digestive system further leading to the segment holding a significant share in the overall market for beta-glucan.

Based on product types, the plant-based leather market is segmented into pineapp...

The fruit & vegetable ingredients market is estimated to be valued at USD 207.8 ...