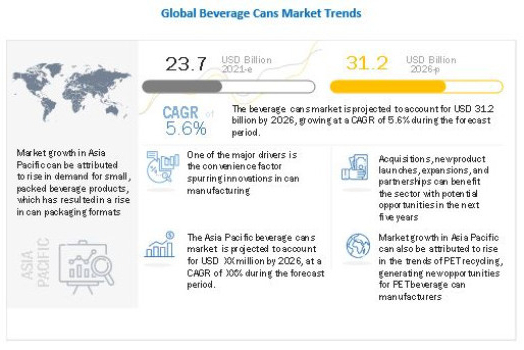 The beverage cans market size is estimated to account for a value of USD 23.7 billion in 2021 and is projected to grow at a CAGR 5.6% from 2021, to reach a value of USD 31.2 billion by 2026. Factors such as the increasing demand for recyclable packaging and lower cost of recycled cans than newly manufactured cans have supported the market growth of beverage cans. Moreover, there is an increase in the use of beverage cans for packaging of non-alcoholic beverages such as carbonated soft drinks, still water, and sparkling water. Moreover, cans help and improve the appearance of beverages as well as increase their shelf life and maintain the freshness of the product, thereby maintaining the quality of the food.

The increasing demand for beverages such as carbonated soft drinks, beer, wine, amongst others, in the Asia Pacific countries, drive the regions growth rate at a higher pace

Asia Pacific is one of the emerging regions for the global market. Countries such as China, India, Japan, Thailand, Indonesia, Australia, and New Zealand are considered for the purpose of the study. Therefore, the growth of the market is expected to be high in this region. Many types of packaging are preferred in the region, such as flexible, rigid plastic, paper, glass, and metal packaging. The demand from the beverage industry is growing due to the rise in population. Global players such as Ball Corporation (US) and Crown Holdings Inc (US) are entering into the Asia Pacific market by developing new manufacturing plants in the region. This led to the rise of the cans market for beverages. High Industrial growth, urbanization, environmental concerns, high disposable income, and lower production of fresh food & beverage products are driving the growth of processed food & beverage products, consequently fueling the demand for beverage cans in this sector.

By beverage type, the non-alcoholic beverage segment is estimated to grow at a higher growth rate in the market

Non-alcoholic beverages majorly constitute of carbonated soft drinks containing carbonated water, vapor, color, sweeteners, and preservatives. Carbonated soft drinks are often found to be deteriorated in terms of the taste and texture when packaged in glass bottles sealed with crown cork. The two major deteriorative changes that occur in carbonated drinks are loss of carbonation and rancidification of essential flavoring agents. These deteriorative changes can be reduced by providing effective packaging of beverage cans. In recent years, due to a rise in the consumption of carbonated beverages, the can packaging industry has seen tremendous growth. Further non-alcoholic beverages such as sports and energy drinks play an important role in an athlete’s life. These drinks contain carbohydrates in the form of sugar, electrolytes, proteins, vitamins, and caffeine and are now being widely consumed.

The beverage cans market size is estimated to account for a value of USD 23.7 billion in 2021 and is projected to grow at a CAGR 5.6% from 2021, to reach a value of USD 31.2 billion by 2026. Factors such as the increasing demand for recyclable packaging...

The global algae products market size is estimated to be valued at USD 4.7 billi...