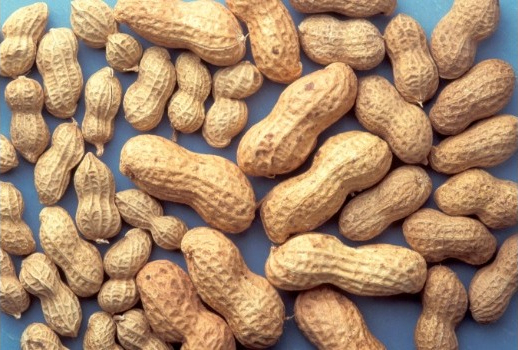 It’s common knowledge among peanut farmers that the farther out you space your peanut crops in your rotation, the better off the peanuts will be.

Research backs this up. Jason Sarver, Extension Peanut Specialist for Mississippi State University, shared some trial work published by Dr. Scott Tubbs of the University of Georgia in 2015, that looked at peanut yield when grown in multiple rotation lengths, from continuous peanut to every 4 years.

The reason peanut yields are lower as the crops are grown closer in rotation is due to disease.

“There’s been research that has shown that if you grow continuous peanuts, we start seeing a lot of disease issues that are going to reduce the yield,” says Dr. Kip Balkcom, Research Agronomist for the USDA in Auburn, Ala. “Primarily, diseases like white mold tend to be more prevalent when you have continuous peanuts. So that’s one of the reasons we try to lengthen that rotation between peanut crops.” 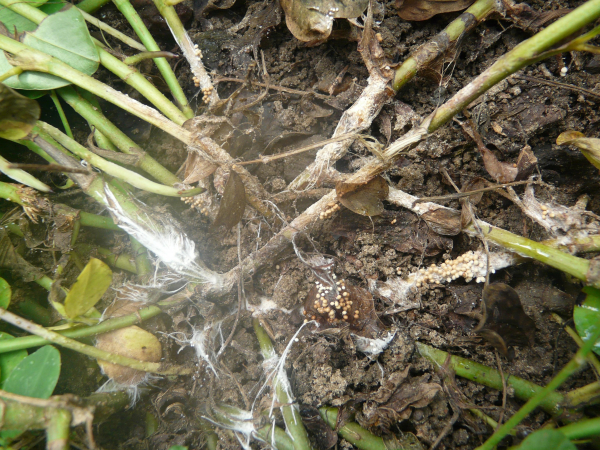 Growing peanuts and other legume crops too close in rotation to peanuts can result in white mold (shown in photo) or Cylindrocladium black rot on the peanut crop. Photo by Bobby Taylor, University of Georgia Extension.

And because peanuts are a legume, it’s discouraged from growing other legumes in rotation with them.

But what about using a legume cover crop? Can you include a legume like crimson clover in a cover crop mix that will be seeded on a field that includes peanuts in the rotation?

The answer is a little more complicated than just yes or no.

Avoid Legumes Before Peanuts; Use Grasses Instead

Balkcom believes the rule of avoiding legumes before peanuts also applies to legume cover crops, and points out that the typical intended purpose of growing a legume cover, doesn’t make sense for growing in front a peanut crop anyway.

“When you plant a cover crop, what are you trying to get out of the cover crop?” he asks. “If we’re planting a legume cover crop, then more than likely we’re trying to produce some nitrogen that will hopefully lower the fertilizer requirements for the subsequent crop.

“Well in this case, peanuts are also a legume, so they don’t have that nitrogen requirement. So it really makes no sense to buy a legume cover crop that’s going to be more expensive than, say, your traditional grass cover crops. There’s no need to pursue that nitrogen benefit.”

“We grow that because we get good biomass production out of that crop,” he explains. “It’s adapted to a lot of different soil types and it’s cold tolerant compared to many species.”

He adds that oats and triticale are also good grass options.

In addition to some of the common benefits — such as erosion control, soil moisture retention and weed suppression — from using a grass species, some studies have shown they can also provide specific benefits to peanuts.

For growers who are dealing with root-knot nematodes in their peanut fields, preliminary research from the University of Florida found that using grass cover crops had the best success in reducing nematode populations.

The study experimented with seven cover crop species for two years on two fields in a peanut production system in central Florida — one infested with root-knot nematode and one that did not have the parasite. The seven cover crops were:

The SARE publication,“Managing Cover Crops Profitably,” references a paper by the University of Georgia that also says that using small grain cover crops in conservation tillage systems have been shown to reduce peanut yield losses from Tomato Spotted Wilt Virus (TSWV) — and the greater the residue left from the cover, the lower the incidence of TSWV. “This benefit was directly related to less incidence of damage from thrips, the vector of TSWV,” the authors say.

Dr. Sharad C. Phatak, professor emeritus of horticulture at the University of Georgia, also shared in the SARE publication that the research staff successfully raised peanuts no-tilled into cereal rye for 6 years without fungicides.

To reap the benefits of a grass cover crop, Balkcom recommends growers seed it early enough and apply some nitrogen to help them achieve adequate biomass.

“Because our soils are sandy soils, we don’t maintain nitrogen in our soils generally,” he explains. “For the cereals, we’ll apply some nitrogen, say up to 30 pounds or so, to try to boost that biomass production even further.”

While these farmers typically use a grass cover after the cotton before going back to peanuts, Balkcom says ideally you’d want to increase the amount of time between that legume cover crop and your peanut crop.

Dr. Dan Anco, Extension Peanut Specialist at Clemson University, also recommends not using legume covers in a peanut rotation — unless the grower adds another year of a non-legume cash crop into the rotation, for every time they plant a mixture that includes a legume cover crop.

One example of this is a 3-year rotation Phatak shared in “Managing Cover Crops Profitably,” noting that he typically used it when working with cotton and peanut growers who wanted to diversify their farms.

In the book, Phatak explains that they use the legume covers — crimson clover, cahaba vetch or subterranean clover — with the rye or along field borders, around ponds, near irrigation lines and in other non-cropped areas as close to fields as possible, to “provide the food needed to support beneficials at higher populations.” 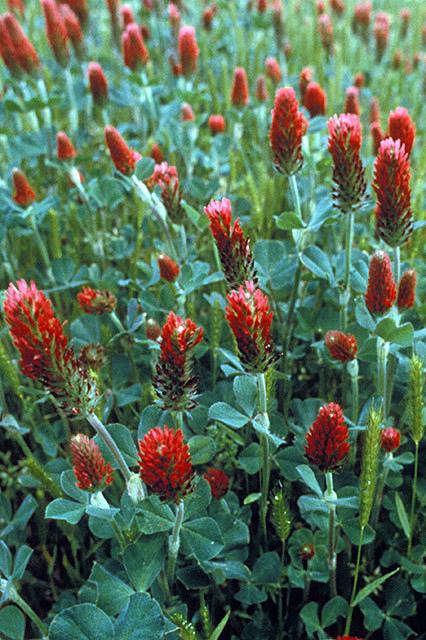 For growers set on using a legume cover crop, like crimson clover, in their peanut rotation, they should plant it after peanuts, before a crop like cotton. Photo by Bob Bjork, USDA Agricultural Research Service.

In addition to no fungicide use, as mentioned above, Phatak has also found on his no-till research plots with covers and long rotations, that he didn’t have to use insecticides on his peanuts for 6 years, and it benefitted the soil overall.

Anco adds that if a grower is intent on planting legume covers in their peanut rotations, they should use peanut varieties that are resistant to white mold (southern stem rot) and Cylindrocladium black rot — the two soilborne diseases that legumes are a common host of.

He warns that using such varieties have their own limitations, and there are also seed and contract limitations. The alternative, he says, is to be prepared to pay more for fungicide programs.

What About Legumes in Cover Crop Mixes?

Some growers may be wondering whether they can get away with using a legume species in their cover crop mix before peanuts. For example, if the mix was 70% grass, 20% brassica and 10% legume, would that little bit of legume still hurt the peanut crop?

Balkcom says that at this point, there’s not a lot of information on that yet.

“We’re starting to really try to do more research with the mixtures,” he says. “We have not probably examined that specific combination for the reasons we talked about before — because there’s really no need to have a legume before peanuts, whether it’s a pure stand or mixture.”

He adds that they’re also trying to decide whether it’s worth the expense and additional management to actually plant a multispecies cover crop vs. just a single species.

While research about using cover crops in a peanut rotation is still underway, Balkcom recommends growers do their best to use cover crops on their peanut fields.

“I definitely think in the Southeast, where we have high rainfall, high temperatures and high humidity, cover crops are going to be beneficial.”

For more information on rotations and cover crops, see the AgFuse article “Should You Rotate Your Cover Crops? 4 Issues to Consider.”

It’s common knowledge among peanut farmers that the farther out you space your peanut crops in your rotation, the better off the peanuts will be. Research backs this up. Jason Sarver, Extension Peanut Specialist for Mississippi State University, shared...