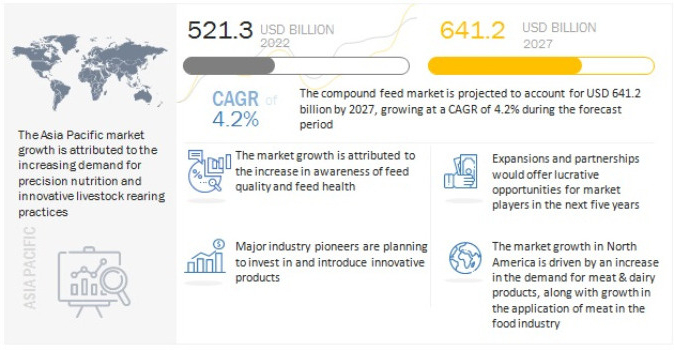 According to MarketsandMarkets, the global compound feed market size is estimated to be valued at USD 521.3 billion in 2022 and is projected to reach USD 641.2 billion by 2027, recording a CAGR of 4.2% in terms of value. Compound feed is a blend of plant-based or animal-based materials in their natural state, or products derived from the industrial processing like organic or inorganic substances, for oral feeding in the form of a complete feed. It can be both fresh or preserved and may contain additives, based on the requirement of the user and it ensures safe and nutritious means of animal proteins. Feed plays a major role in the global food industry. There has been an increase in demand for livestock products for domestic consumption from farmers and livestock rearers, with the growth in awareness regarding the benefits of high-quality feed. According to FAO, balanced rations ensure sustainable livestock production globally, and this has been shown to promote methane and nitrogen excretion reduction, thereby boosting profits for small-scale farmers due to increased animal productivity.

The Asia Pacific region accounted for the largest market share in the global compound feed market. The region is also projected to witness significant growth due to presence of several local and key players in the region. The increased meat consumption and rising focus and awareness about animal health have resulted in the growth of the compound feed market in the region. Along with this, the growth in poultry production in countries like India and China has witnessed tremendous growth over the last decade with the Asia Pacific dominating the global poultry industry.

Based on ingredients, cereals accounted for the largest market share in the overall compound feed market. Cereals are whole and ground grains that serve as a nutritional source for animals. Cereals that are prominently used include soy, maize, corn, barley, sorgo, etc., these are used as fodder in compound feed. Different regions use different cereals in the feed based on their availability and price. The compound feed is very effective in improving gut health and improving digestibility in livestock.

Amongst sources, plant-based dominates the compound feed market with the largest market share in 2021, and is obtained from plant sources like oils, vegetables, grains, etc. The drivers for plant-based compound feed are that it is perceived as potentially less resource-intensive, environmentally friendly, and has good nutritional aspects as compared to animal-based.

Based on form, mash dominates the compound feed market as it is simplest to manufacture and involves mixing and grinding of all raw materials. Since it is cost-effective to manufacture, its demand is generally seen in developing countries.

Based on livestock, the poultry segment is projected to be the largest and fastest-growing segment during the forecast period. Improving economic conditions and rising awareness of animal feed are some of the driving factors. Poultry production and consumption have been on the rise in the last decade and meat producers are increasingly focusing on the quality of meat which gives a boost to the compound feed market in the poultry segment.

According to MarketsandMarkets, the global compound feed market size is estimated to be valued at USD 521.3 billion in 2022 and is projected to reach USD 641.2 billion by 2027, recording a CAGR of 4.2% in terms of value. Compound feed is a blend of plant-based...

Listen to the podcast at HOME | What Color is Your Tractor Stories of the ag bra...