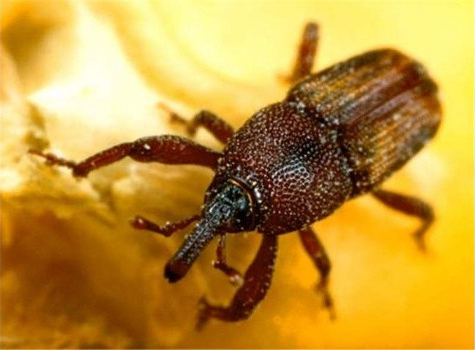 Corn is an important cereal grain grown worldwide and is a staple food in many countries. Every year the corn industry faces millions of dollars’ worth of losses primarily due to faulty logistics and poor storage facilities. Here, the damages due to storage pests and diseases are amongst the main post-harvest losses seen in stored corn grains. Depending upon the conditions, the losses may vary from slight to extensive— inevitably impacting our food security. In some cases, there may even be a direct health hazard to the humans and animals who consume the compromised grain.

Quality deterioration due to pest infestation is the most common form of post-harvest losses in the corn industry. Of the many relevant insect pests, two groups are normally associated with major economic impact: grain weevils and grain moths.

Weevils (both adults and larvae) are voracious feeders of the grains, causing extensive damage and spoiling of the corn kernels. The insects have fast breeding cycles and rapid multiplication rates within the storage units and this can lead to the destruction of all unprotected grains in a matter of months.

Grain moths are capable of destroying complete and unbroken grain kernels. Here, the economic damage is caused by larvae and not the adult moths. A particularly infamous species is the Angoumois Grain Moth, which is known to outperform others in terms of its destructiveness. The infested corn grains are mostly left hollow with an unpleasant odor, rendering them objectionable for consumption. 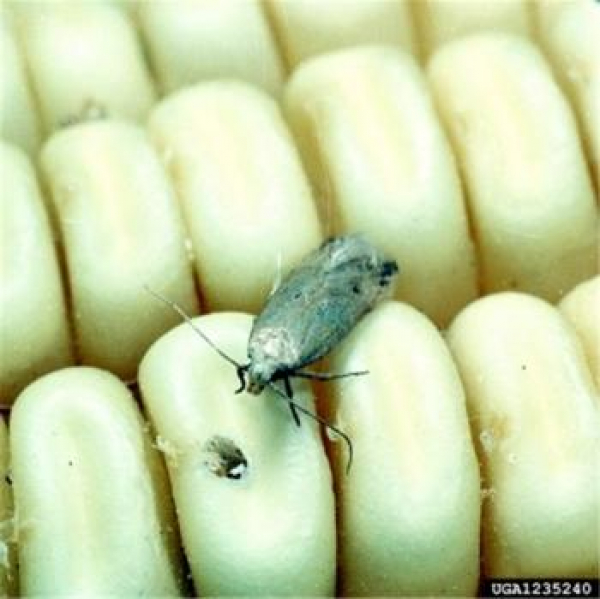 Cross infestation and field infestation are the main means of survival and spread of these insect pests. The former occurs when a fresh batch of grains is dumped along with the previous or remaining batch, which is already infested. Field infestations are also common where the adult insects invade and lay eggs on the mature grains of the standing crop, which is later harvested and brought under storage.

Diseases of stored corn are primarily caused due to fungi including molds. This growth leads to an array of symptoms including discoloration, rotting, heating, and caking of the kernels while in storage, making them unfit for consumption. Stored grains provide optimum nutrition to these fungi, given the grains have ample moisture and the storage conditions are warm and humid.

Among the many types of fungi, Aspergillus and Penicillium are the most commonly encountered mold-causing fungi.

One of the most disturbing facts about such molds is their ability to produce certain chemical compounds that are harmful to both humans and animals. These compounds collectively known as 'mycotoxins' are a major concern for food security in several parts of the world.

According to the World Health Organization (WHO), mycotoxins are a significant source of food-borne illness and categorized as a priority food safety issue. Some mycotoxins result in acute and severe symptoms in humans and livestock on exposure while other mycotoxins may lead to chronic and long-term illnesses.

Aflatoxins produced by Aspergillus species are amongst the most potent mycotoxins, which can cause acute poisoning and damage to the liver. They are also known to produce cancer by affecting the DNA of the organism.

Besides direct exposure, such mycotoxins often reach the human system through the milk and meat of livestock that has been fed with infected grains.

How to minimize the losses?

Preventing the pest or disease incited damage altogether may not be possible, but one can put effort to minimize the losses. Over the years, scientists have unraveled the biology and mechanism by which pests and diseases attack stored grains and these experts conclude that the role of the storage environment is of utmost importance for such incidences. By following scientific storage practices one can effectively control the stored grain pests and diseases. Here are a few tips:

Bring down the moisture. Seeds contain very high moisture content, which is an obvious invitation to insect pests and storage molds. The top priority, once the corn has been harvested, is to properly dry it. Whether you sun-dry or machine dry, it doesn’t matter as long as you bring the seed moisture down below at least 12-13%.

Don’t mix your seeds. Mixing an older batch (probably contaminated!) of corn with a new batch could result in a major cross infestation. Refrain from doing so unless you are 100% sure of its purity.

Avoid frequent withdrawals. The more times you withdraw grain, the higher the chances of contamination from the environment.

Use hermetic packaging. The primary function of hermetic storage is to cut off the supply of oxygen to make it uninhabitable for the insect pests to thrive. The best example of this is the Purdue Improved Crop Storage (PICS) hermetic bags developed by the Professor of Entomology Larry Murdock and his associates. They are low cost, chemical-free, and globally accepted. Give it a try. 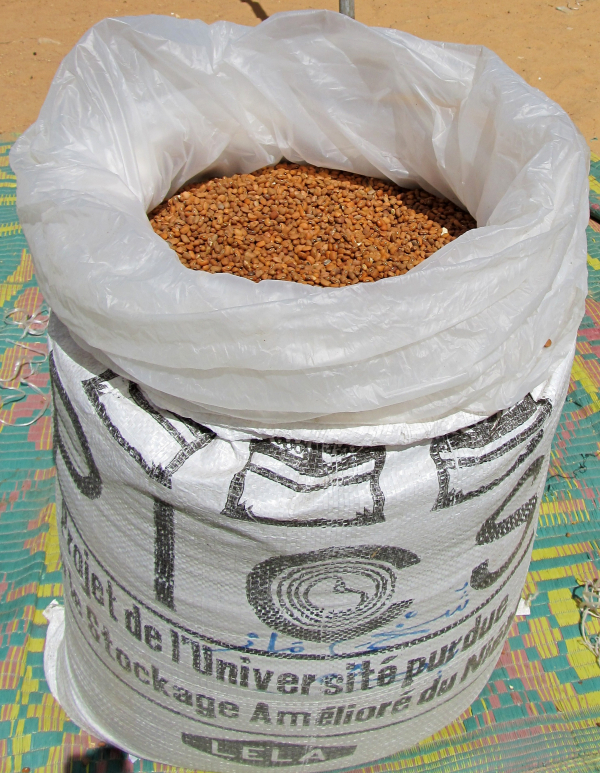 Purge them using chemicals. Although spraying chemicals like insecticides (Eg. Malathion 50EC) and fungicides seem to be a tempting solution, it is only recommended to those stored for seed purpose and not for grains stored for human or animal consumption. This is best suited for prophylactic treatment to prevent cross-contamination. Of course, growers should also understand pre-harvest options when it comes to corn fungicides.

Fumigation. This is by far the best technique to achieve a near-complete eradication of the existing insect pests (egg, larva, pupa, and adults) and fungi from the seed lot. Fumigation is best suited to relatively large storage units where critical maintenance of the storage environment is difficult. It is performed under the supervision of trained personnel.

Gamma irradiation. One of the recently commercialized technologies, where the entire grain batch can be sterilized using gamma rays. The high penetrating rays achieve complete extermination of the pests and disease-causing agents present on and within the kernels. It is best suited to grains stored for consumption and not seed purposes. This technology is highly regulated and done at licensed centers by trained personnel.

Corn is an important cereal grain grown worldwide and is a staple food in many countries. Every year the corn industry faces millions of dollars’ worth of losses primarily due to faulty logistics and poor storage facilities. Here, the damages due to...