Over the years, with the advent of climate change, the growing need to maximize production yields and the introduction of new stress-tolerant hybrids, early planting of corn has become an increasingly widespread agricultural practice.

In reality, what are the benefits and risks of early planting, which lead producers to adopt this cultivation technique?

One of the main reasons why early planting is favored is the possibility of obtaining earlier flowering, which improves the photosynthetic efficiency during the period with greater availability of solar irradiance.

A second benefit is to limit exposure to heat and water stress on the crop in the most sensitive phenological phases: the maximum evapotranspiration occurs at the beginning of summer when the soil water reserve is greater and can compensate for the evapotranspiration demand.

Early planting also induces in the plant greater resistance against the attacks of the second generation of the pyralid: the gnawing caused by the larvae in the stalks provokes less damage, as the grain is in the physiological maturity stage (growth stage R5-R6). 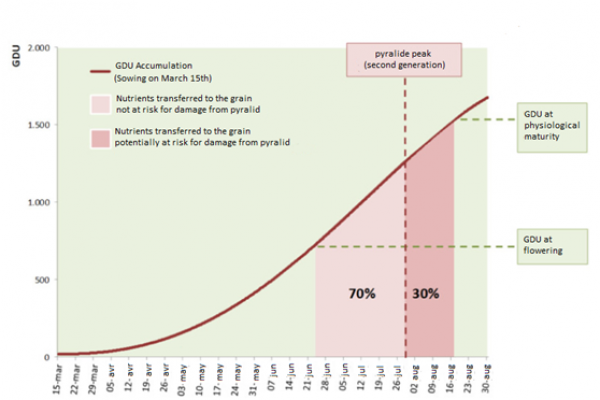 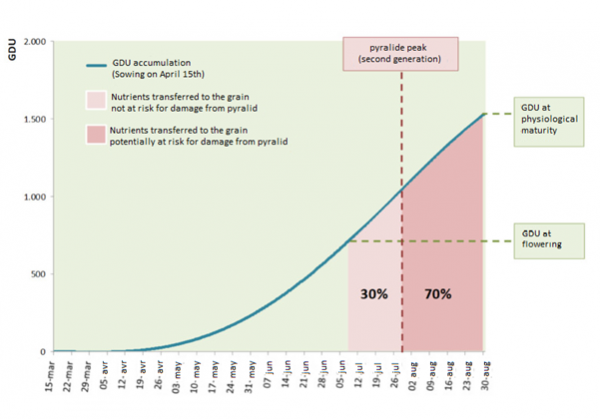 Another important advantage is the advance of pollination, which helps avoid high temperatures. The optimal activity of bees occurs at temperatures between 46.4 °F and 82.4 °F. Between 82.4 °F and 89.6 °F, bees’ activity level gradually decreases.

In Kansas, Missouri, Nebraska and South Dakota, early planting by one week compared to the traditional period reduced the yield losses by up to 40% as pollination took place during adequate, not excessive, temperatures.

One of the main risks that can be incurred with early planting is germination and emergence delay. This is usually due to an inadequate soil temperature, which is often variable or less than 50° F from the end of March to mid-April. This can lead to potential yield losses of 8% to 10%.

Also, if very rainy periods occur at low temperatures in the days following planting, this weather induces a longer delay in the germination and emergence, significantly affecting the final yield. There may also be losses on initial investments as most hybrids manage to survive submergence and stagnation only for 24-48 hours.

Prolonged exposure to cold returns and rainfall induces more sensitivity to attacks by pathogens and herbicides: cold water can damage the seed membrane or whole plant in the emergence phase, making it more susceptible. Even if water stagnation isn’t excessive, the lack of oxygen in the soil causes metabolic damage, which leads to a greater sensitivity to abiotic and biotic stresses.

How to benefit from the advantages and avoid the risks

There are two main factors that should influence your choice of early planting:

To determine whether early planting can be an effective strategy for corn cultivation, it is necessary to evaluate the climatic conditions at the time of planting and consider the forecast of rainfall that will occur during the week following planting.

The ideal temperature for planting should be higher than 50-53.6 °F. Also, heavy rains should not occur in the following days, especially in heavy and poorly draining soils.

Sandy soils, characterized by a good drainage capacity, are more suitable for early planting as they take less time to warm up and quickly drain excess water.

As for the practical aspects, it is essential to pay particular attention also to the planting depth, which must be a maximum of 1.95-2.34 inches. Besides, to speed up the soil heating and create the ideal climatic conditions for successful early planting, it is necessary to ensure the absence of crop residues at the end of winter. An adequate soil preparation promotes aeration and, therefore, the oxygen availability for plants.

The choice of hybrids also affects the potential benefits that can be obtained with early planting: full-season hybrids exploit the entire growing season and provide greater production.

In environments where there is low water availability and high temperatures, such as in Kansas, choosing a short-medium hybrid is preferable to optimize the harvest and prevent kernels from being subjected to heat stress during drought conditions.

Being ready to plant is a winning strategy, but there are many aspects to consider to effectively optimize the situation based on your operation's circumstances.

Over the years, with the advent of climate change, the growing need to maximize production yields and the introduction of new stress-tolerant hybrids, early planting of corn has become an increasingly widespread agricultural practice.In reality, what are...