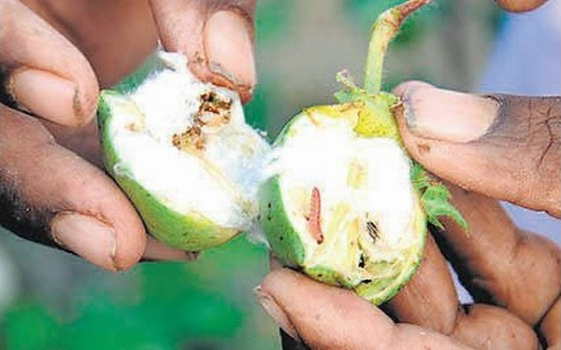 Cotton is by far the most important fiber crop in the world. India is the largest producer of cotton followed by the US, where it is considered as a major cash crop playing a key role in the countryŌĆÖs agricultural and industrial economy. According to ŌĆśStatista.comŌĆÖ, the US produced 20.1 million bales (1 US bale = approx. 500 pounds) of cotton in the year 2019.┬Ā

The cotton industry has seen radical changes over the decades regarding production capacity and value. All thanks to genetic engineering the Bt technology revolutionized the cotton industry and has led to unparalleled success.

The science behind Bt cotton

Bt or Bacillus thuringiensis is a soil-borne bacteria that was studied in the early 1900s for its ability to kill insects of the lepidopteran family (moths and butterflies). By the mid-century, the bacterium was being widely used as a biological control against lepidopteran pests of many crops. Scientists found the insecticidal ability to be attributed to a crystal protein (often referred to as Cry proteins) present within the bacterium. Soon the advancements in the fields of biotechnology and molecular biology made it possible for the genetic material (genes) responsible for this crystal protein in bacterium to be transferred into plant systems such as cotton.

The insertion of the genes from B. thuringiensis caused cotton plant cells to produce these Cry proteins. When an insect larva feeds on GM cotton plants, the Cry proteins are also ingested along with them, which on reaching the insect gut gets activated into a potent toxin. The activity of this toxin results in the rupture of the insect gut which stops the insect from further feeding and ultimately leading to its death.

There are different types of Cry proteins depending upon the strain of the Bt bacteria. The first Bt cotton marketed in the USA (Bollgard I) contained the Cry1Ac gene producing Cry1Ac toxin having high insecticidal activity on tobacco budworm and pink bollworm which were difficult and expensive to control using traditional insecticides.┬Ā

The next generation was Bollgard II Bt cotton which contained Cry2Ab genes. The Cry toxin from this gene was effective against a wider range of caterpillar pests than the original Bollgard technology.┬Ā

From the time when Bt technology was conceived, the scientists predicted the chances for the emergence of resistance in insect pests against the Cry proteins. This is because Bt technology imposes only a single mode of action against the insects. Thus, the particular protein offers excellent insecticidal activity in the early years, but over time the insects slowly develop resistance against the particular class of proteins and at some point completely overcomes its effects.┬Ā

Such effects are also prominently seen in the case of insecticide applications, where its continuous and irrational application leads to the development of resistance in insects against the particular chemical.┬Ā

Some factors have shown to accelerate the process of resistance development in insects:

1. Availability of host plants. If the same host plants (producing Cry proteins) are cultivated continuously in an area or near to it, the likelihood of resistance development is very high.

2. Exposure frequency. The insects exposed multiple times to the Cry proteins through ingesting the Bt cotton is likely to develop more resistance.

4. Availability of mating pairs. If both resistant and non-resistant insects are present in the same vicinity, there is more likelihood for them to mate and produce offspring carrying the resistance traits.

In many parts of the world these phenomena have already been reported, followed by severe consequences. In recent years, farmers who planted the Bt cotton faced severe backlash when the Bt-resistant pest population emerged resulting in heavy economic losses. Now they have started resorting to pesticides that put a heavy toll on the cost of cultivation.┬Ā

The story does not end there; the same pests are developing resistance against the pesticides as well, creating even more dilemmas among the farmers.┬Ā

The least you can do to reduce such incidences are:

1. Avoid monoculture. Growing Bt cotton alone in a field for longer periods hastens the resistance development of tobacco budworm and bollworm. Employ mixed cropping and crop rotation strategies (such as rotating Bt cotton with other non-Bt crops (that is not a host to the same insect pests).

2. Use varieties with multiple Bt traits. Bt cotton having more than one cry gene can offer much protection against budworms and bollworms.

3. Use varieties with high Cry protein potency. According to insect resistance management (IRM) strategy, only the Bt cotton varieties producing high concentrations of cry proteins should be employed in the field. This helps to effectively kill moderately resistant insects thus eliminating the accelerated build-up of resistance in the insect population.

4. Use insecticides sensibly. Chemicals should be sprayed on cotton rationally and as per the recommendations. This will prevent pesticide-resistance development in insects.

The scientific community is putting rigorous efforts to come up with better and sustainable solutions to tackle this challenge. In the coming years, we are sure to see many positive developments and interventions in the cotton industry.

Cotton is by far the most important fiber crop in the world. India is the largest producer of cotton followed by the US, where it is considered as a major cash crop playing a key role in the countryŌĆÖs agricultural and industrial economy. According to...

How to Cultivate Cotton Organically

Though most of the organic cotton in the world comes from Asia, Texas in the USA...

You hear the same advice all around during times like this: ŌĆ£The farmers who w...

It's that time of year again where planting prep is on the brain. Soon, things w...