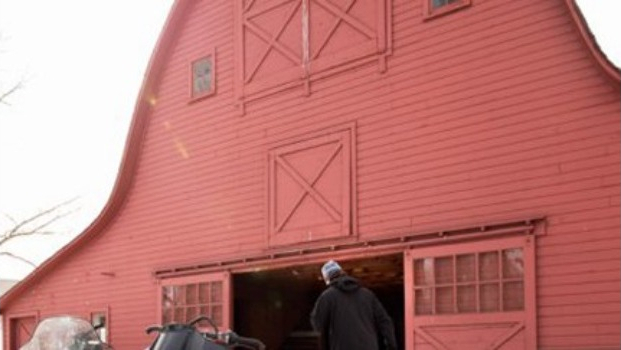 Excessive roof snow load can cause your barn to collapse

When heavy snow meets fierce winds, even the best-engineered buildings can collapse. That's why it's important to calculate your roof load an adequately insured for this type of situation.

How snow load can damage your buildings

It doesn’t take a blizzard to cause problems. An imbalance of drifting snow can cause one part of a roof to give, causing a domino effect.

How much snow is too much?

Calculating the roof load on your barn takes more than an educated guess. The University of Wisconsin Cooperative Extension Service says that a ballpark estimate of roof snow load can be made with the following formula:

You should know the roof weight limits for your barns and outbuildings. If necessary, rebuild or fortify them to withstand worst-case scenario snow loads and meet local building standards

Some failures can be prevented with careful snow removal. The University of Wisconsin Cooperative Extension Service offers the following suggestions:

A few minutes can give you reassurance during a heavy-snow winter. Check with your farm or ranch insurance agent to:

This information was obtained from sources believed to be reliable. Nationwide Mutual Insurance Company and its employees make no guarantee of results and assume no liability in connection with any suggestions or information contained herein. Furthermore, it cannot be assumed that every acceptable safety method is included in this article or that specific circumstances may not require additional methods or alternative safety suggestions. Also, nothing contained herein is meant to represent or indicate compliance with applicable standards or requirements mandated by federal, state or local jurisdictions.

Taking inventory of your farm equipment Think about how long accumulating your f...

This Week in Agriculture:The Trade Truce Edition: December 7, 2018· The much an...

· Continued Chinese negotiations and getting settled back into the routine of r...

The Simple Business Lesson that Farmland Partners Can Teach Us

There’s a simple lesson to be learned from the recent Farmland Partner’s acc...

So Good They Can't Ignore You: How to get attention as a young farmer

For aspiring young farmers, often times the only thing standing in the way of th...

Prepare your farm for weather emergencies

Severe weather brings a host of potential challenges for farmers and ranchers. T...

Top 10 Things to Consider when Expanding your Farm Operation Farmers and rancher...

Get livestock insurance from Nationwide

When you get an AgriChoice® farm insurance policy from Nationwide, you’re als...