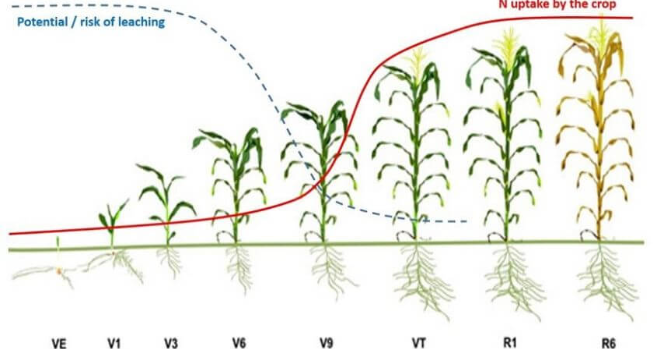 Grain yield is strongly influenced by various factors, such as soil characteristics, irrigation, genetics, climate, cultivation techniques, and use of fertilizers.

Fertilizers contribute incisively to the final production. To develop optimal fertilizer recommendations, it is necessary to determine the status of plant-available nutrients. The right fertilizer doses avoid incurring saline stress or nutritional deficiencies that lead to yield losses.

What elements should growers consider besides the results of a soil test?

The chemical-physical analysis of the soil is only a starting point to accurately establish the nutrient requirements of plant growth. Growers need to evaluate irrigation, crop rotation and soil organic matter content, which strongly influences the optimum fertilizer doses, especially when it comes to nitrogen uptake.

In confirmation of this, the University of Wisconsin provided the recommended annual nitrogen uptake, based on these characteristics, compared to the potential yield.

These values ​​should be amended depending on the crop residues before planting corn: when they cover at least 50% of the soil, it is advisable to increase the nitrogen inputs by 30% to facilitate the mineralization of the organic matter. If the previous crop is a legume, this addition is not necessary.

Also, regarding P and K, the fertilizer inputs vary according to the potential yield and soil nutrients content. 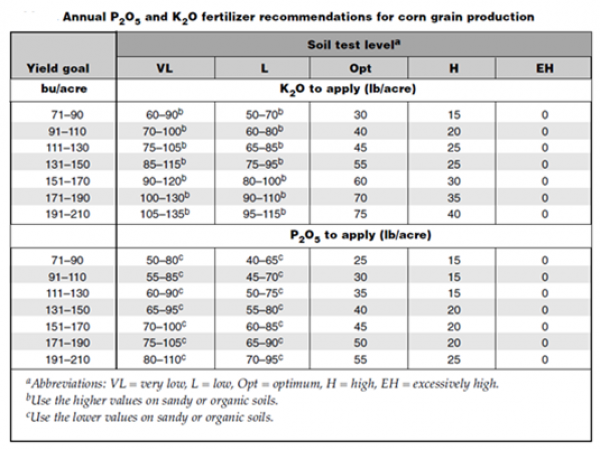 In this case, the irrigation also affects the recommendations: generally, it is sufficient to increase the dose by 20% in irrigated land.

According to the guidelines of the University of Pennsylvania, 50-90% of N uptake must be distributed as a sidedress when the plant is 10 to 20 inches tall. Generally, this occurs after about 30 days from emergence when there is the maximum requirement of N. This way, the distributed nitrogen is not subject to leaching and denitrification, which reduces the efficiency of fertilization and damages the environment.

From the graphs, we see how important it is to identify the right timing for fertilizer application in order to avoid a situation where the crop doesn’t have N during the most demanding phenological phases.

Recent studies led by the University of Wisconsin have shown that the adoption of this strategy has led to higher yields in almost all types of soil, but especially in sandy and irrigated ones.

Furthermore, in some cases, the use of ammonium-based N starter, which has an inhibiting effect of denitrification, distributed in pre-planting has improved the grain yield. Despite this, ammonium is toxic to the roots so it is advisable to use ammonium phosphate, which provides K and has a low concentration of ammonium. Ammonium-based formulations must always be positioned 2 inches away from the seeds.

However, the use of N starter in pre-planting is not a stringent standard to obtain higher yields, as effectiveness depends on the characteristics of the soil, as shown in the study carried out by University of Wisconsin.

Regarding P and K, an increase in yields was found in many tests using P20 and K20 based starters in pre-planting, even in soils where the nutrients content was already high. The positive response to the starters was more frequent (50-60%) when the sum of the hybrid RM and date of the planting is 240-250, while less frequent (40-50%) when the sum is between 220-230.

In general, to obtain yield improvements, the ideal is to make minimum doses of complete starters (10 + 20 + 20 N, P2O and K2O), both in soils that have low nutrients content and in those with good ones, but not in soils with excess.

Grain yield is strongly influenced by various factors, such as soil characteristics, irrigation, genetics, climate, cultivation techniques, and use of fertilizers.Fertilizers contribute incisively to the final production. To develop optimal fertilizer...

Mark Smith Cumberland City, TN
Jan 27
This is very true. I interned at a soil lab, and these are soil samples taken from 3 different states across the U.S. this is after soil organic matter content has been done. Clearly, minerals also play a vital role in fertilizer use and application. We did studies on germination, growth rates, etc. with these and other samples where exact inputs were monitored and kept consistent across all three samples. As might be expected, while the exact same inputs were provided for the different soil types, there were differences in germination, growth rates, etc. think of it this way - broad generalization but applicable: most every soil type is in the process of breaking down into the next soil type. Differences of course involve the geological strata of the soil in that region, and rates of input (sun, rain, wind, plant matter, etc.) that would affect the rate of decomposition.

Just as certain minerals make better batteries than others, the cation exchange (CEC) will have a rough baseline based on mineral composition of specific soils, and is why some regions are better agricultural producers for certain crops than others. For example, here in Central Tennessee, we lime every to temporarily change the CEC, but it “reverts back to a baseline” (my words) at the end of each season as rain and gravity work the inputs down through the lower soil strata. This has led to the saying I learned from a Vermont Cooperative Extension agent: “good land you pay for once, bad land you pay for each and every year”.

Over the years, with the advent of climate change, the growing need to maximize ...