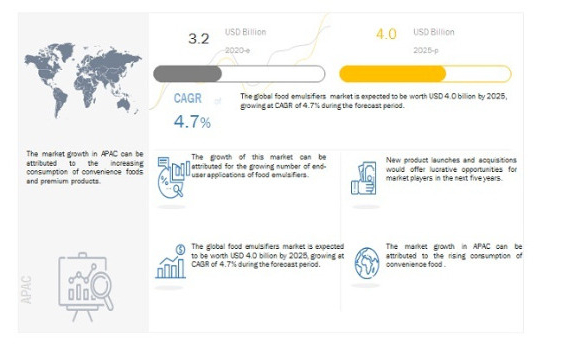 Asia Pacific is projected to be the fastest-growing region in the food emulsifiers market from 2020 to 2025. The market here is majorly driven by the changing food consumption patterns in the region, owing to the rising income, especially in South Asian countries. Further growth can be attributed to the increasing urbanization in the region, which has resulted in an increasing demand for food security and quality food. Top companies are also investing largely in this region, in terms of expansion. Archer Daniel Midlands (US) opened a technical innovation center in Shanghai, China, to support the development of innovative, on-trend, and nutritious products to meet the growing food & beverage demand in Asia Pacific.

The food emulsifiers market is a developing one; it finds its applications in a number of food products, increasingly finding favorability amongst food & beverage product manufacturers, whereby these additives could be used to maintain better product structure integrity and a longer shelf-life. Manufacturers could successfully use different emulsifiers to create products having consistent structure and texture, which could further help to improve their product offerings and market preferability. To produce food in greater quantities, the requirement for food additives such as food emulsifiers will automatically increase. According to the International Association of Agricultural Economist, the demand for food is projected to grow from 59% to 98% by 2050. Also, there has been an increase in the demand for quality food, without compromising on the quantity across the globe. Food manufacturers are using food emulsifiers as economical additives to produce quality products, which, in turn, drives the market growth.

On the basis of type, the lecithin segment in the food emulsifiers market is projected to grow at the highest rate from 2020 to 2025. This growth is attributed to the gradual shift towards decreasing the chemical content in processed foods by manufacturers due to the rising consumer awareness. Even though other types of emulsifiers are mostly naturally sourced, they tend to undergo further chemical treatment processing unlike lecithin, which does not require much processing. This is why it is perceived to be more natural than its other counterparts. These factors are responsible for the growing use of lecithin in various food applications, which include confectionery and convenience foods among others.