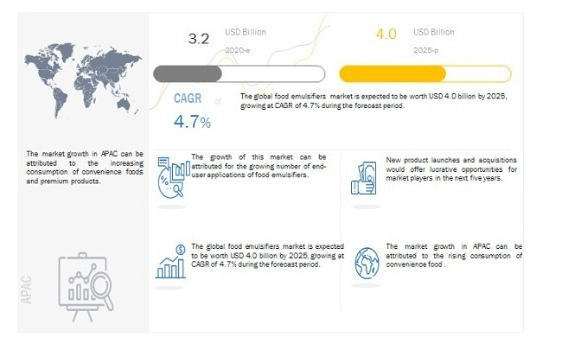 Food Emulsifiers Market worth $4.0 billion by 2025

The Asia Pacific market is projected to grow at the highest CAGR from 2020 to 2025. The high growth is attributed to the changing food consumption patterns in the region, owing to the rising income and urbanization, especially in South Asian countries. Further growth can be attributed to the increasing urbanization in the region, resulting in the growing demand for food security and quality food. Food manufacturers are expected to use food emulsifiers due to their multifunctional properties.

This report includes a study of the marketing and development strategies used, along with the product portfolios of leading companies. It consists of the profiles of leading manufacturers such as Archer Daniels Midland Company (US), DowDuPont (US), Cargill (US), Kerry Group Plc. (Ireland), and Ingredion Incorporated (US). Other players include Corbion N.V. (Netherlands), Lonza Group Ltd. (Switzerland), and Palsgaard A/S (Denmark). Furthermore, Riken Vitamin Co. Ltd. (Japan), Tate & Lyle (Ireland), and Beldem S.A. (Belgium) are the other players that hold a significant share in the food emulsifiers market.

Food Emulsifiers Market worth $4.0 billion by 2025

The global food emulsifiers market is estimated to be valued at USD 3.2 billion in 2020 and is projected to reach USD 4.0 billion by 2025, at a CAGR of 4.7% during the forecast period. The rise in consumption of processed foods due to the rising disposable...