How international money wants to invest in American Farms. 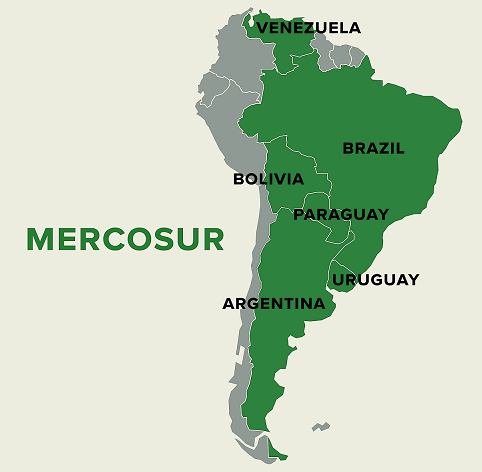 MERCOSUR, or “ The Common Market of the Southern Cone” was established in March of 1990 by the Treaty of Asuncion and was implemented to create a Common Agricultural trade export import market by its now four signatories ( Argentina, Brazil, Paraguay, Uruguay and Bolivia) Venezuela is no longer part of the BLOC and Bolivia has a rather divided influence in MERCOSUR’S role. It has succeeded its predecessor, LAFTA ( Latin American Free Trade Association) in both economic integration as well as unlimited agricultural capital funding and has evolved into a powerful international influence in trade, agriculture, finance, exports, imports, and tariffs with many allies of which desire and inherently depend on its scalability including the United Arab Emirates, The European Union and more recently The United States of America.

Brazil and Argentina are the largest Member countries, in territory and population in South America and each have large as well as highly developed consumer markets. Argentina is rich in Natural Resources and has a robust Export Oriented Agricultural Sector. Brazil on the other hand has a much larger economy than Argentina with established Agricultural, Mining, Manufacturing, and Service Sectors. Its principal Agricultural products include Coffee, Soybeans, Wheat, Rice, Corn, Sugarcanes, Cocoa, Citrus, and Beef.

The MERCOSUR is a powerful dominant force in international global markets and originally began with its Members;Bolivia, Venezuela, Paraguay, Uruguay, Brazil and Argentina as direct Member Countries, in South America, however it is rapidly gaining momentum by its cooperative Associate Member Countries in Central America and its international prowess relies on its ability to cooperate confidential public private initiative agreements with cooperating countries desiring to do corporate business attached with attractive concessions by partnering with MERCOSUR for the sake of obtaining finance, capital, agricultural export or import, natural resources and as an exchange for favor. It is however important to distinguish its Members current state and its Associate Members current state.

At present, The MERCOSUR and its members and associate members are targeting investment into agriculture in the United States. To find out more please contact us at www.agrilend.co

How international money wants to invest in American Farms.

MERCOSUR, or “ The Common Market of the Southern Cone” was established in March of 1990 by the Treaty of Asuncion and was implemented to create a Common Agricultural trade export import market by its now four signatories ( Argentina, Brazil, Paraguay,...

What The Intelligent Investor Can Teach Us About Farming

The Intelligent Investor, a book by Benjamin Graham, is widely considered to be ...