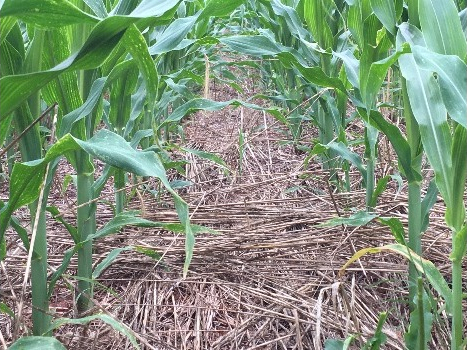 Cover crops not only helped Russell Hedrick win the 2016 North Carolina Dryland and No-Till Dryland yield contest, they also saved him $123 per acre on fertilizer and herbicide costs.

There are many factors that can influence corn yield. In fact, Fred Below, a plant physiologist at the University of Illinois, identified seven of them, which he dubbed the “Seven Wonders of the Corn Yield World.”

The seven wonders, ranked in order of most influence on yield, are:

While Below was referring to the cash crop rotation in the fourth wonder, some farmers are taking it one step further by seeding cover crops. The benefit of added crop diversity along with improvements to soil health is paying off, as some of these farmers are achieving the highest yields in the country.

Planting corn after corn usually results in a yield hit in the subsequent corn crop. While Russell Hedrick didn’t intend for his yield-winning corn to follow corn — most of his farm is in a corn-soybean rotation, occasionally with some small grains — it proved just how beneficial cover crops can be in a mono-cropping situation.

His intention with the small grains was to sequester carbon, build soil organic matter, suppress weeds and improve the soil’s water retention as well as water infiltration rates, while the legumes were used for balancing the carbon-to-nitrogen ratio. He’s been trying to provide organic amino acid forms of nitrogen over commercial fertilizer.

“If you apply synthetic nitrogen, there’s a whole complex process that has to take place to convert those into plant-available amino acid forms,” Hedrick explains. “It utilizes a lot of water and a lot of energy. So we’re trying to give the plant the most easily accessible and resource-conserving nitrogen that we can.”

He believes that cover crop mix played a direct role in the 318.5-bushel yield he achieved in 2016. Typically a farmer would have to apply 320 units of nitrogen to achieve those kinds of yields, but Hedrick only applied 140 units, adding that the stalk nitrate samples they pulled after harvest indicated they could’ve gone with as little as 100 units.

“Achieving the high yields is fun to do, but at the same time we try to maintain profitability,” he says. “Those cover crops coming into the equation have really helped us with our profitability.”

He notes that corn was also non-GMO. He only made one pass on the crop, which included his burndown application of gramoxone, atrazine and simazine, while also topdressing nitrogen.

“We did not have a lot of money invested in those high-yield crops,” he says.

While cover crops are an added expense — Hedrick spent $38 per acre on seed — they’ve provided more reductions in inputs to lower his expenses overall.

In addition to these hard savings, he’s seen his organic matter increase from 2.5% to 5.5% after six years of cover cropping on that contest-winning field. His water infiltration rates have also skyrocketed from ½-1 inch per hour to now 6-7 inches per hour.

“I think we’re not only getting more moisture but we’re moving it down deeper in the profile, conserving it for later, and we’ve seen a steady increase in yields,” Hedrick says.

Hedrick tries to practice the living root method, meaning that as soon as the cash crop is harvested, he aims to have the covers established within 14 days, labor- and weather-permitting.

He prefers to drill them in right behind the combine, as drilling provides a more consistent stand and even emergence with the multispecies blends, but if wet weather is in the forecast he’ll broadcast them, which he’s also had good success with.

“Getting them established timely is really crucial, because that provides the maximum benefit return that we’ve seen on our farm,” he says.

In the spring he plants directly into the cover crop before terminating them, also called “planting green.” This maximizes the amount of biomass above ground and root mass below ground, resulting in better weed suppression.

He also has fewer issues in maintaining proper planting depth. Before he used to spray, roll the cover, then plant, but now that he has a roller on the planter, he’s able to plant and roll in one pass without having to cut through the residue. He aims to spray his burndown within 2-3 days of planting. 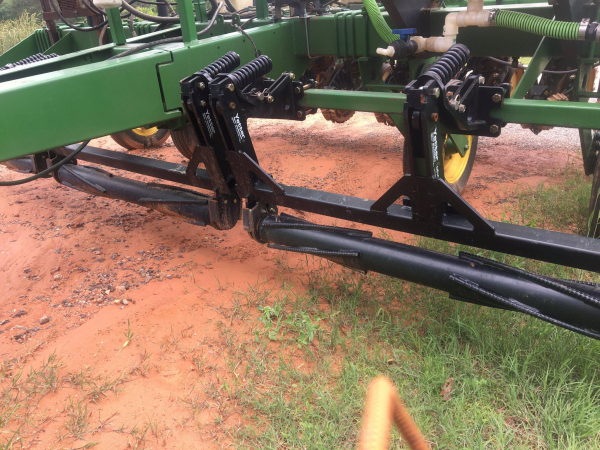 Russell Hedrick uses a Yetter 5000 Stalk Devastator on the front of his planter to roll and crimp cover crops as he plants into them. Photo courtesy of Russell Hedrick.

By planting green Hedrick’s dry cover crop biomass is averaging between 12,000 and 15,000 pounds per acre. To provide a visual of that, in his contest-winning field the covers were over his head — and he’s 6½ feet tall.

The one warning he gives to farmers about planting green is to watch their soil moisture. If it’s a dry spring, you’ll need to burn the covers down ahead of time to keep them from taking up all of the moisture, but that’s only happened to Hedrick once in the six years he’s been farming.

Hedrick’s advice to other farmers on using cover crops is try something new.

“Understand that cover crops are not a silver bullet,” he says. “They do take time. Don’t measure your success off of one year’s failures.”

He also recommends starting with test strips so growers can monitor the benefits, then expand those benefits through covers across the entire operation.

He advises farmers pay attention to their carbon-to-nitrogen ratios, as too much high carbon biomass can tie up nitrogen. He does this by submitting samples of his cover crop biomass to the University of Georgia to determine how much nitrogen is in his cover crops, when it’s available and how long it’ll be available for.

Seth More of Dee River Ranch isn’t in the business of growing corn just for yield contests. Instead, he says the family farm treats the crop the same across the entire field and enters what they believe is their best spot.

While sometimes they guess wrong — More says there have been times they’ve already entered a yield when they discover another area did even better — it also means their high-yielding practices impact their whole crop, not just a small contest plot. That includes cover crops.

More seeds a blend of tillage radishes and forage turnips between his corn and soybeans, while a mix of oats, Austrian winter peas and clover follows soybeans before corn. The field that grew the contest-winning corn had cover crops seeded to it for six years. 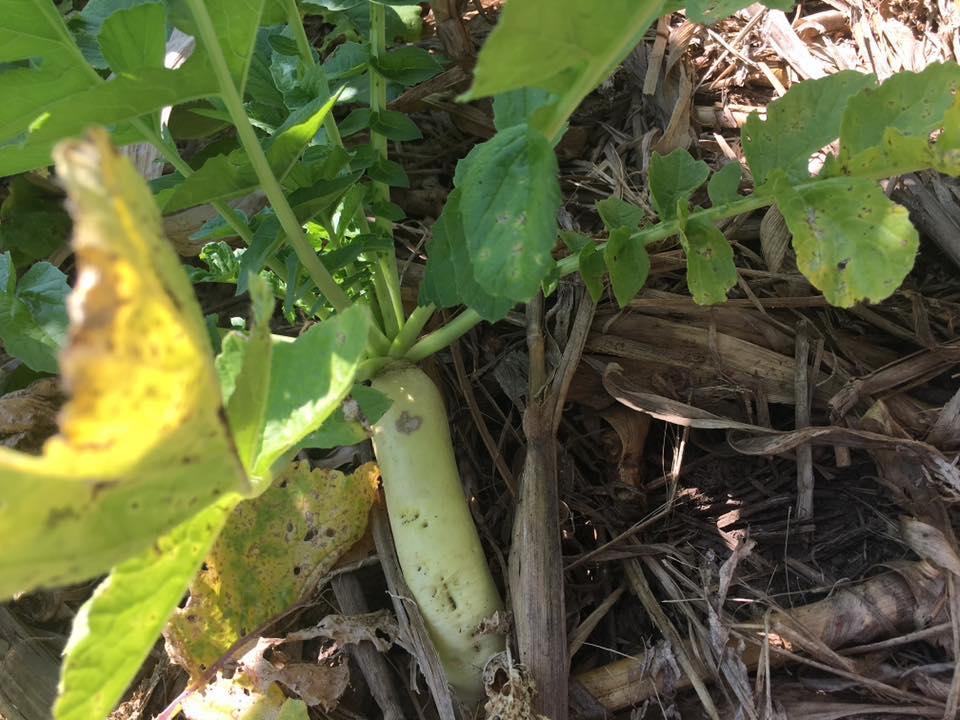 Dee River Ranch's cover crop of tillage radishes, flown on at a rate of 4 pounds per acre in July before corn harvest. Photo courtesy of Dee River Ranch.

His goal for using cover crops is to increase organic matter — which on most fields has gone from 2% or less to 7% and higher — break up the soil hardpan and increase the soil’s water-holding capacity.

While the covers benefitted his yield-winning corn, they’ve also had a big impact on his soybean yields. More recalls two years ago he ran out of cover crops on a field going to soybeans, so half of it was left bare. The soybeans that followed the cover crops yielded 30 bushels higher than the soybeans seeded to bare ground.

More flies his radishes and turnips on at a rate of 4 and 3 pounds per acre, respectively, into his standing corn crop in July before harvesting the corn, while the three-way blend is seeded after soybeans in mid September. He says the reason he uses radishes and turnips into corn is because the heat will kill his other mixture. 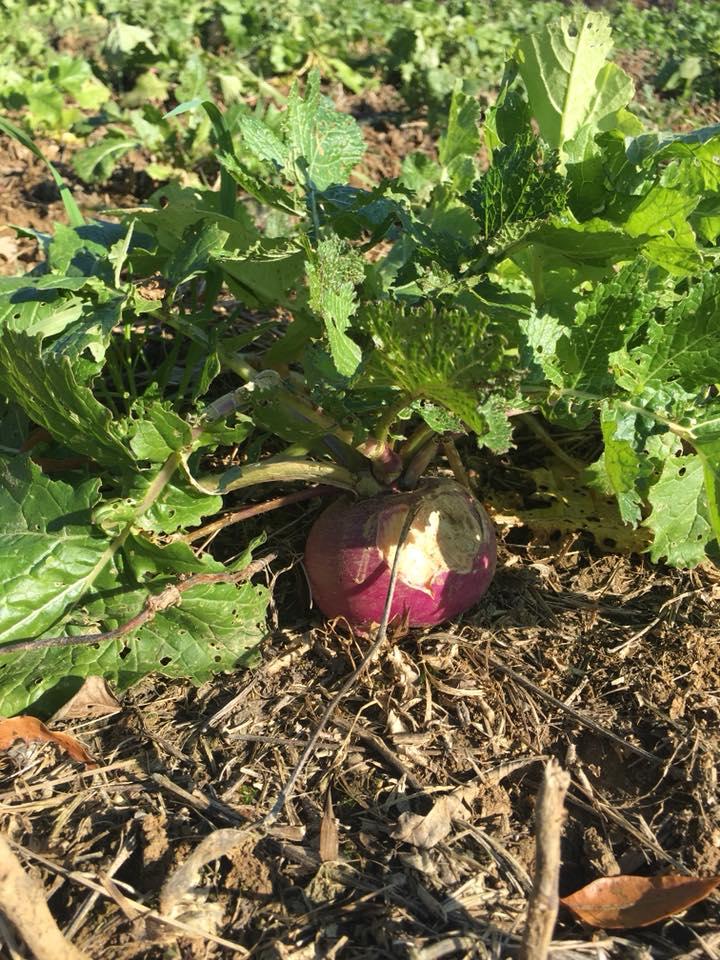 Forage turnips are also flown into standing corn in July at a rate of 3 pounds per acre. Photo courtesy of Dee River Ranch.

While he normally burns down the radishes and turnips in February, this was the first year they winterkilled, and because they suppressed the weeds, he didn’t need to do a burndown or pre-emerge application.

“Every time I go through the field with a piece of equipment it’s costing me money,” he says. “If I can save those passes, I’m avoiding compaction and it’s not costing me anything.”

Next step in higher yields

More’s advice to other farmers is that covers are the next step in increasing and maintaining soil fertility, which in turn improves yield.

“Poultry litter brought us a long way back in the 90s,” he says. “Then once we started seeing some of the benefit of that, we went to variable-rate fertilizer, per-acre grid sampling, and that took us to another level.

“Now the cover crops have allowed us to achieve higher yields than we’ve ever seen. We farm about 4,000 acres and most of our fields are anywhere from 100-200 acres a plot. It isn’t unusual for us to cut 300-bushel across a 100- to 200-acre field. Being in central Alabama, we feel that’s a pretty good goal.”

There are many factors that can influence corn yield. In fact, Fred Below, a plant physiologist at the University of Illinois, identified seven of them, which he dubbed the “Seven Wonders of the Corn Yield World.”The seven wonders, ranked in order... 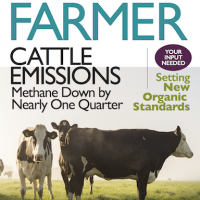 Louis Snyman Bunbury, Western Australia, Australia
Jun 13, 2018
Great article, Laura. Where can we get in touch with you in regards to publishing your article?

Louis Snyman Bunbury, Western Australia, Australia
Jun 25, 2018
Thank you Laura, we will be in touch