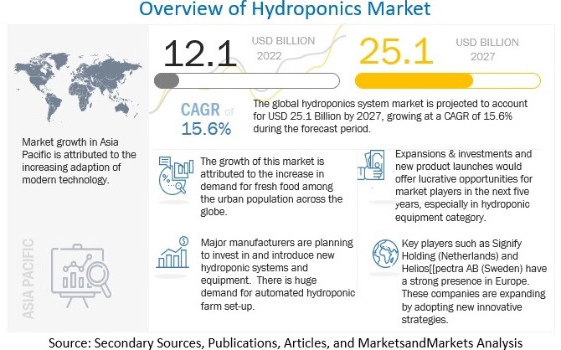 The global hydroponics market is estimated to be valued at USD 37.7 Billion in 2022 and is projected to reach USD 53.4 Billion by 2027, recording a CAGR of 7.2%. The hydroponic system market is valued at USD 12.1 Billion and is projected to reach USD 25.1 Billion by 2027. Hydroponic technology is an efficient alternative to the rising concerns on food security and shrinking arable land since it allows growers to cultivate crops even in the absence of soil. One of the major drivers is that hydroponics provides higher yield compared to traditional agricultural techniques, owing to the increase in harvest cycles. Furthermore, hydroponics eliminates artificial ripening agents and pesticides, which helps create nutritionally superior vegetable products.

The Asia Pacific is among the key regions for the hydroponics system market, driven by concerns over climate change, food security, and the demand for cleaner produce. Asia Pacific is projected to reach USD 6,922.2 million by 2027 growing at a CAGR of 16.4% during the forecast period in hydroponics system market. As the climate across the Asia Pacific, especially in Southeast and Western Asia, is conducive to the growth of different types of crops, different countries observe varying agricultural conditions in crop rotation and seasonal produce. In China, Rice and vegetable seedlings were grown in China using modern hydroponic methods as early as the 1970s. The "Lu-SC" hydroponics technology, created by researchers at Shandong Agricultural University (SAU) around this time, was utilized to grow greenhouse vegetables in the Xinjiang and Shengling oil fields. Countries in the region seek to expand their agricultural production capacities to meet regional demand and enhance their export capabilities.

Among types, the liquid systems segment is projected to grow at the highest CAGR in the overall hydroponics market during the study period. Liquid systems are closed systems; the plant roots are exposed to the nutrient solution without any growing medium, and the solution is recirculated and reused. Liquid hydroponic systems can be effective for fast growth and large yield since plants have direct access to oxygen and food in the form of functional mineral compounds.

Based on equipment, the LED grow light segment is forecasted to be the fastest growing segment. Hydroponic LED grow lights are artificial lights that aid in the growth of plants by attempting to mimic the sun lights’ whole spectrum or by adjusting the light spectrum to the demands of the plant in a grow room. When operating enough of them to support a full indoor farm, led grow lights tend to use less energy than certain regular bulbs. They are also made to be cold to the touch, so if they come into contact with any leaves, they won't burn them.

Based on crop type, fruits are forecasted to grow at a higher CAGR in the market during the study period. Fruits grown using hydroponics can be cultivated and harvested throughout the year due to the interior conditions of the greenhouse or indoor farming unit. Water-adaptable fruits such as watermelons, cantaloupes, and tomatoes are among the ideal choice for farmers as they are easier to grow using hydroponic methods.

On the basis of farming methods, the indoor segment is projected to account for larger market share in the global hydroponics market. Indoor farming allows strict control of lighting, temperature, pH, and other climatic factors. Due to this, selected crops can be grown of the growers’ choice all year around. LED light-based indoor farming is usually done in small spaces such as in the apartment, cellar, garage or anywhere in the house or office. Hence, end consumers can install systems directly, allowing them access to fresh vegetables, fruits, and other crops. Natural light-based indoor farming is usually done in greenhouses. The larger space in greenhouses allows the use of different hydroponic systems. Vertical towers or long gutter gardens can be built on the sides of sheds are good examples. These are nearly impossible to do well in an LED light-based indoor environment. They will grow, yet they require a large growing area and will need illumination from a horizontal position.

The agricultural surfactants market is projected to reach USD 1.88 Billion by 20...