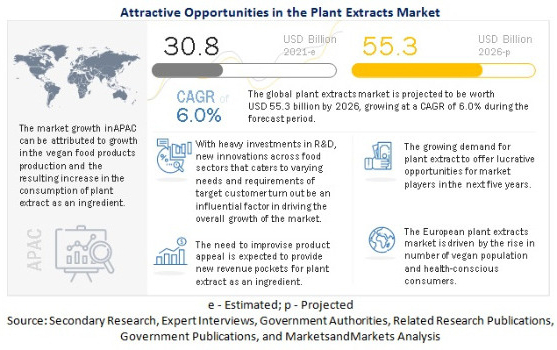 The global plant extracts market is estimated to value USD 30.8 billion in 2021 and is projected to reach USD 55.3 billion by 2026, at a CAGR of 6.0% during the forecast period. The growth of the plant extracts market is driven by the rising consumption of nutritive convenience food and fortified food and the growth in health awareness among consumers are leading to the increased consumption of healthier diets. Plant extracts as functional ingredients have been gaining popularity among target customers—the food & beverages industry. As a result, the rise in the demand for functional food products among health-conscious consumers eventually triggers the demand for plant extract products in the global market.

The phytomedicines and herbal extracts segment hold the largest share in the plant extracts market. With the surge in demand for natural ingredients and natural products due to the rise in awareness related to better dietary choices, the growth of the aging population, the increase in the trend of a healthy lifestyle, and the growth in incidences of chronic diseases, resulted in a large number of manufacturers investing in R&D and producing various innovative extracts, which contribute to the nutritional health of consumers. With the growing vegan population preferring only plant-based products, natural plant extracts are gaining immense popularity among consumers that are further expected to propel the market growth. However, consumer skepticism associated with the adoption of several plant extracts in different applications and inadequate supply of raw materials, and price fluctuation could hinder the market growth to a certain extent during the forecast period.

Furthermore, among the various application of plants extracts, the cosmetics segment is expected to rise at the fastest rate during the forecast period. Demand for chemical free cosmetics are decreasing due to its adverse side effects. The importance of essential oils is increasing day by day because they are mostly used in cosmetics industries for adding fragrances and medicinal properties in various products. The growth markets for uses of Essential Oils are expected to be gaining higher demand in the rapidly developing countries (dominated by China and India), Eastern Europe, and Russia and less developed countries such as Cambodia, Bangladesh, and Myanmar. For the long-term, the amount of Essential Oils consumed in these growing markets is predicted to exceed the current consumption of industrialized countries. The demand is predicted to be greatest for low-value fragrance oils used in soaps, creams, perfumes and related products.

In the fastest-growing North American region, Mexico is expected to grow at the fastest rate during the forecast period due to the growing economic development in Mexico because of which it is experiencing various socio-economic transitions, which is driving the demand for plant extracts. The health market in Mexico is rapidly developing due to the increased Foreign Direct Investments (FDI) and consumer awareness of the benefits of a healthy diet. The growing health and wellness trend in this country is driving the market for nutraceutical ingredients, such as phytomedicines & herbal extracts. A growing number of chronic lifestyle diseases have also urged several consumers to adopt healthy food products. Hence, Mexican consumers tend to look for products to reduce the effects of obesity and help them maintain the required fitness levels. These trends are leading to an increased demand for organic products for food, beverage, and dietary supplement industries in the country.