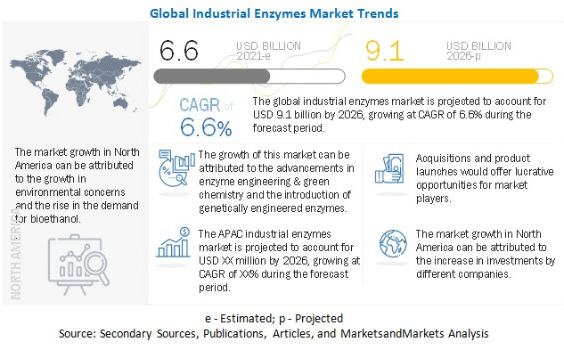 The global industrial enzymes market is estimated to be valued at USD 6.6 billion in 2021. It is projected to reach USD 9.1 billion by 2026, recording a CAGR of 6.6% during the forecast period. New technical applications of enzymes are being developed to enhance the production processes. Numerous companies in the textile industry incorporate enzymes as an alternative to chemicals to produce mild reactions that lead to clean and chemical-free garments. Gene modification in the existing enzyme has resulted in significant developments to enable enzymes to be functional under altering temperatures and pH levels.

The need for non-renewable sources, such as fossil fuels, has increased during the last few decades; hence, the search for sustainable and renewable alternative sources has gained growing interest. Enzymatic hydrolysis in bioethanol production presents a vital step, where sugars that are fermented are obtained in the final fermentation process. In countries with surplus agricultural capacity, ethanol produced from biomass can be used as a substitute, extender, or octane booster as an alternative for traditional motor fuels, such as gasoline, diesel, and kerosene. Bioethanol is prepared from agricultural waste containing corn stalks, leaves, bagasse of sugarcane, sugar beet, sorghum stalks, wheat, barley, rye, and by-products, such as whey from cheese making and potato processing waste streams.

Enzymes are recognized as alternatives to traditional chemicals and provide solutions to problems related to synthetic chemicals. Synthetic chemicals used in industrial processes threaten the environment as they are harmful. Enzymes, such as carbohydrases, which are derived from plants and microorganisms, have no negative impact on the environment as they work under mild conditions, thus reducing energy consumption and decreasing greenhouse gas emissions. Carbohydrases derived from plants and microorganisms are utilized in the textile, starch processing, and bioethanol production industries. The leather industry has switched to proteases and trypsin over lime and sulfides to obtain high yields with cleaner products. Amylase and protease are used in the bakery industry to get maximum output. Enzymes are also used to improve the nutritional value of food and feed products. Enzymes reduce water consumption and chemical waste and decrease by-product generation, posing negligible risks to humans and the ecosystem. Hence, the use of enzymes is considered cost-effective, safe, and environmentally friendly.

Initially, animals were the only source of enzymes. The major source of animal enzymes is the pancreas or stomach of the animal. Animal-based enzymes were specifically extracted from cows and swine. Unlike all other enzymes, animal enzymes are associated with numerous concerns, as they function only at low pH levels. These enzymes are also found to be temperature-sensitive. The most common animal enzymes are trypsin, pancreatin, and chymotrypsin. However, these enzymes are destroyed due to acidic conditions before they can perform their actual function. Thus, due to the temperature sensitivity, most animal enzymes are substituted by plant- and microorganism-based enzymes. This has illustrated a steady decrease in the demand for animal enzymes, thereby lowering their share in the market. Furthermore, enzymes derived from animal sources are unstable at a low pH environment, resulting in high costs for industrial applications. Animal-based enzymes are delicate, which requires extra care during handling and preparation, further increasing the cost of production.

According to a study published by the United States Department of Agriculture (USDA) in 2018, the North American population spends almost 14% of their household expenditure on food. This resulted in food & beverage manufacturers incline toward increasing the shelf-life of various products, which would augment the demand for food enzymes in the North American region. According to the US Department of Health & Human Services, “From 1999–2000 through 2017–2018, the prevalence of obesity increased from 30.5% to 42.4%, and the prevalence of severe obesity increased from 4.7% to 9.2%.” The growing demand for clean-label and natural ingredients in the region is likely to drive its use in food applications in the US, Canada, and Mexico. Industrial enzymes used for baking, fats & oil processing, and dairy are likely to drive the growth of the market.

The global industrial enzymes market is estimated to be valued at USD 6.6 billion in 2021. It is projected to reach USD 9.1 billion by 2026, recording a CAGR of 6.6% during the forecast period. New technical applications of enzymes are being developed...