Many farmers across the U.S. experienced wet weather last growing season. According to NOAA, the 12-month period between July 2018 and June 2019 set the precipitation record in the U.S. with an average 37.86 inches per month — 7.9 inches above average.

The result of all that precipitation had a negative impact on growers. The USDA says that more than 19.6 million acres were reported as prevented plant, with the RMA paying out roughly $4.26 billion in claims related to flooding and excess moisture.

One way to help manage these high rainfall events is to improve soil water infiltration — the faster it can enter the soil, the less likely it will pond or run off the farm, taking valuable soil and nutrients with it.

But what are the best practices for increasing water infiltration rates?

University of Nebraska-Lincoln (UNL) assistant professor of agronomy and horticulture Andrea Basche set out to find just that. Along with Marcia DeLonge, Union of Concerned Scientists’ research director and senior scientist of food and environment, Basche conducted a meta-analysis that analyzed the effects of no-till, cover crops, crop rotations, perennial plantings and cropland grazing on infiltration rates.

A meta-analysis, Basche explains, is a research approach to carefully combine results from many experiments to look for broader patterns. Their meta-analysis included 89 studies from six continents.

Basche and DeLonge’s research discovered the practice that improved water infiltration rates the most was having perennial crops, such as grasses or trees, incorporated into the cropland. They found experiments where perennial treatments were compared to annual crops improved infiltration rates by an average 59%. The experiments included three types of perennial systems: agroforestry, perennial grasses and managed forestry.

“Despite differences among and between the practices,” Basche and DeLonge say in the paper, “the perennial practices showed a consistent pattern in that growing perennial rather than annual plants led to improved infiltration rates.” 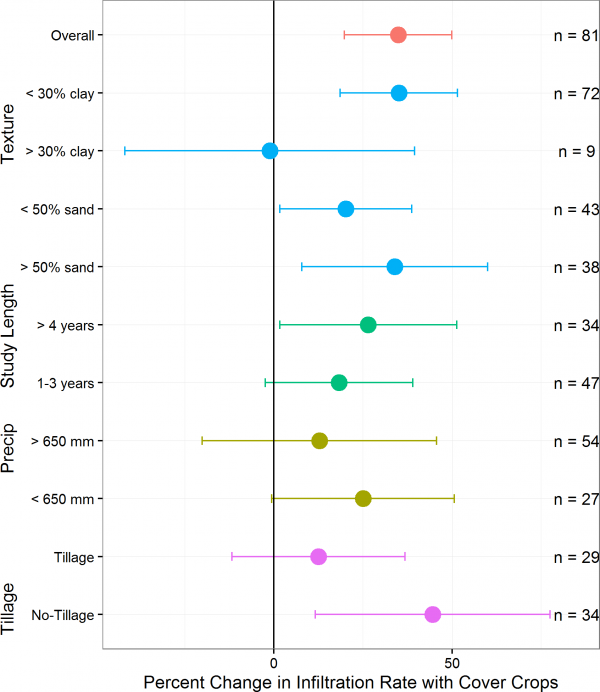 Response of infiltration rates to subsets of cover crop experiments. Figure from Basche and DeLonge's paper.

Basche and DeLonge also noted there was evidence that cover crops had a greater impact on water infiltration rates in coarsely textured soils with higher sand content and less clay. And when combined with no-till, compared to no-till alone, cover crops significantly increased rates by an average 45%.

No-Till Not as Influential

However, no-till on its own did not have as great an impact on water infiltration rates as might be expected. Data from 52 studies found no overall effect from no-till alone.

There were only two situations where no-till improved water infiltration: in wetter environments and in studies where the data explicitly reported that residue was retained. Basche clarifies that this doesn’t mean the other studies were removing residues, just that only certain studies reported the data that way.

Basche admits that no-till not improving water infiltration was the most surprising finding from the meta-analysis, considering other studies have shown a positive effect from no-till, as well as anecdotal evidence.

In fact, a meta-analysis study conducted by researchers from ICAR-Indian Agricultural Research Institute and the International Rice Research Institute found that no-till increased steady-state infiltration rates by 66%, and improved field capacity water content at surface and sub-surface layers by 6-16%.

So why did Basche and DeLonge’s meta-analysis find different results?

Basche believes part of it may be due to the way researchers reported their data, which she says is often a limitation in such studies. For example, some studies did not report different tillage treatments, while others may have reported infiltration rates for stacked practices (such as no-till plus cover crops), while their meta-analysis was looking to isolate practices.

Another limitation may be in how researchers set up their studies, Basche says, noting that unlike farmers who will often make adjustments when they see something isn’t working, university researchers aim to keep everything the same so they can focus on a single factor.

The timing of the water infiltration measurements were taken may be another reason why no-till wasn’t as influential.

Basche adds that it’s important to note that with an analysis like this, it can be hard to find general patterns about how much the environment, such as soil types, impacts the results.

“You are limited by what studies are included in your database, which do not represent a full distribution of soils and environments,” she explains. “I think those types of results should be interpreted carefully.”

Regardless of the meta-analysis results, Basche doesn’t want farmers to get hung up on the idea that no-till never increases infiltration.

“But when we looked at these different practices related to soil health, the most consistent and largest improvements came from those practices that had continuous roots in the soil,” she says. “It wasn’t just minimizing disturbance — it was the roots that had the biggest impact.”

Since one of the instances where no-till improved infiltration rates is where residue retention was reported, Basche says it’s fair to say that leaving residue may be what makes the difference in increasing water infiltration under no-till. 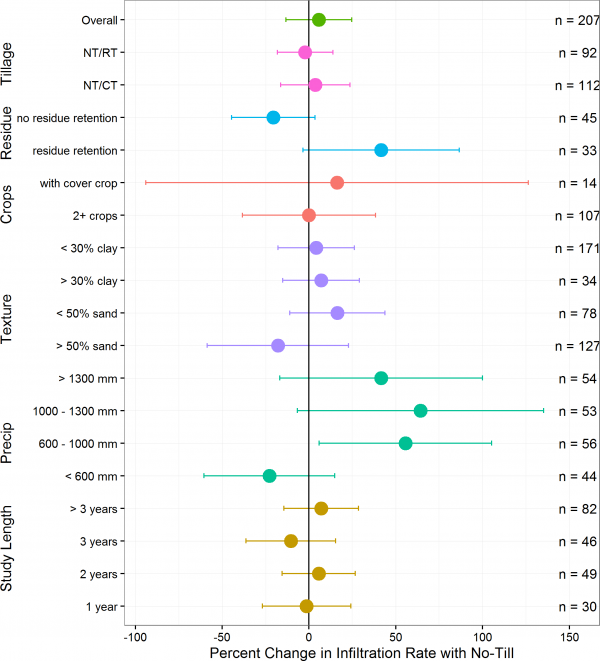 Response of infiltration rates to subsets of no-till experiments. Figure from Basche and DeLonge's paper.

Results from other studies back up the importance of residue retention for water infiltration. A 6-year UNL study found that removing 60% of corn residue decreased water infiltration rates from 2.13 inches per hour to 1.43, and Sustainable Agriculture Research and Education (SARE) cites infiltration increasing up to 180% in field trials from soil surface coverage by residue alone.

Get More Roots Down More Often

Given the findings of the meta-analysis, Basche says that if growers want to improve water infiltration, their best bet is to consider ways they can increase the frequency and distribution of roots in the soil.

While perennials proved to be the best option from the meta-analysis, Basche recognizes it may not be a suitable option for everyone. Which is why she says it’s more important to focus on the principle of increasing the frequency and distribution of living roots in the soil vs. the practice.

“The two practices that offered continuous roots in the soil were the ones that led to the largest and most consistent improvements in infiltration,” she says. “Roots activate soil biology, improve soil structure, and potentially increase carbon. So it makes sense that they could be the start of the chemical, biological and physical changes in the soil that can increase water entering and being retained in the soil.

“If increasing water infiltration is a goal, then consider management strategies that can offer more roots in the soil more times of the year. How can you make it work on your farm?”

For many farmers, cover crops will likely be a suitable practice for achieving that goal. But deciding on the best species will depend on each farmer’s location and cropping system, Basche says, especially their annual precipitation. What works for a dryland farmer out west will probably not be the best fit for a farmer with a lot of rainfall in the Midwest.

There are many factors that can influence corn yield. In fact, Fred Below, a pla...

Early Cover Crop Benefits: What Can You Expect in the First Year?

In 1995, Pennsylvania farmer Steve Groff was speaking at an event when he asked ...

It’s common knowledge among peanut farmers that the farther out you space your...