A common concern growers may have when they move to a no-till system is nutrient stratification.

Without tillage to mix fertilizer into the soil, no-tillers may wonder whether the nutrients applied to the soil surface are reaching the crop roots.

According to University of Nebraska Extension engineer Paul Jasa and Ray Ward, plant scientist and founder of Ward Laboratories in Kearney, Neb., the resounding answer is: yes, they are.

Even though stratification — the non-uniform distribution of nutrients within a soil’s depth, with higher concentrations of nutrients toward the soil surface — does occur in no-till, it should not be a concern. In fact, they say it’s a natural phenomenon and as long as you’re managing your no-till system properly, you shouldn’t have a problem.

When you fertilize your pasture, your rangeland or your lawn, how deep you till it in?

That’s the question Jasa asks farmers who worry about nutrient stratification in their no-till systems. He asks, if you can put nutrients on top in a natural growing system, why can’t they be placed on top in a cropland system?

Ward also points out in native prairies, nutrients work their way down into the soil naturally, just as it occurs in no-till systems. It’s why he prefers to call it nutrient distribution instead of stratification.

In fact, stratification even occurs in tillage systems.

Even as tillage continued, there was actually more stratification in tillage than in no-till. The reason for this is a stronger soil structure under no-till.

“The nutrients can move downward with water through the earthworm channels and root channels that are there,” he says. “In tillage, we destroyed those channels so they can’t move downward.”

Another reason stratification is not a concern in no-till is because of higher soil moisture, thanks to undisturbed residue.

Jasa says that when it comes to nutrient placement, there are three rules:

In fact, studies have found that no-tilled crops tend to have greater uptake of surface-applied fertilizer than conventionally tilled crops.

According to a paper written by University of Kentucky soil scientist John Grove, Ward and University of Maryland soil scientist Ray Weil, research conducted in Kentucky from 1980-81 looked at corn’s uptake of surface-applied potassium under moldboard plowed and no-tilled plots that were established in 1970.

Despite the fact that potassium stratification was “substantial and more pronounced” in the no-till plot — 170 ppm for a 2-inch soil depth vs. 132 ppm in the moldboard plowed plot — potassium uptake of the no-tilled corn was 130% of the moldboard-plowed corn.

When the study looked at the total or composite soil test potassium at a 12-inch depth, they found it was nearly identical between the two — 105 ppm for no-till, 107 ppm for the moldboard plow. Scientists concluded “this strongly suggests that the potassium nutrition of the two corn crops was improved by potassium stratification.”

In 2004, he compared yields between corn that received: 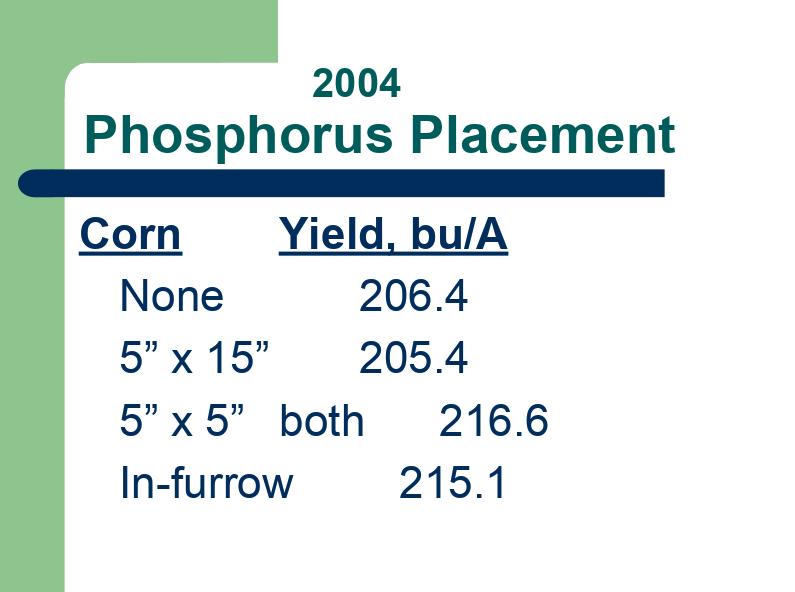 “If phosphorus stratification were a problem, putting it deeper should’ve given you a bigger yield,” he explains. “But it didn’t. In the furrow was no problem.”

Noting that it was a dry year, Jasa found the phosphorus that was banded and dribbled resulted in the highest corn yields. 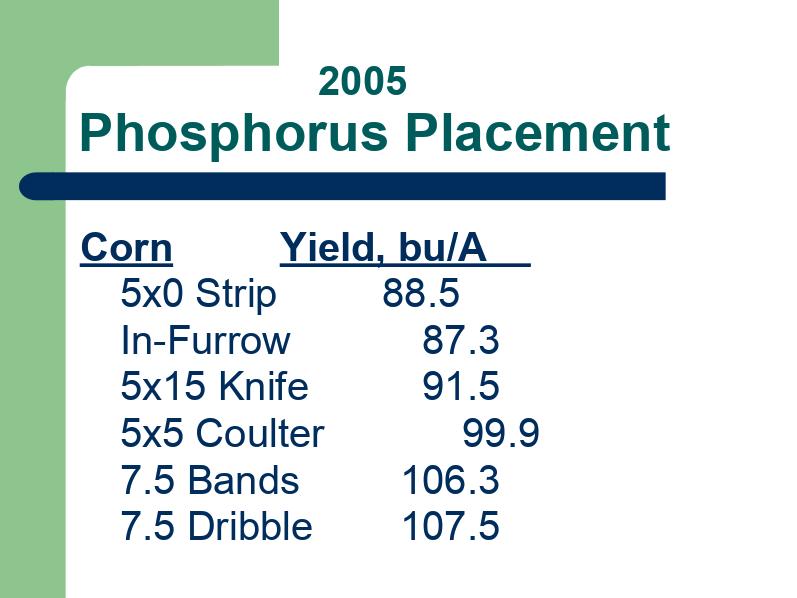 “That’s because the residue was not disturbed and the fertilizer was right there, so it ran down into the soil and the roots picked it up,” he says. “It just comes down to where are the roots, and is there moisture there for the roots to take the fertilizer up? If the residue is there, there should be moisture.”

Because the roots need soil moisture to absorb fertilizer, leaving crop residue on the soil is key to maintaining that moisture.

Jasa says he likes to see 100% residue coverage until the crop canopy takes over, but growers need at least 90% to reduce evaporation from the soil surface, according to irrigation engineer Norman Klocke.

Why do you need so much residue? Jasa says that Klocke gave him the example of an energy-efficient house. If someone leaves the front door open, it doesn’t matter how well-insulated the house is — the heat is going to escape.

Soil moisture works the same way. Too little residue and the water will find a way to escape from the soil surface.

For no-tillers whose soils are so biologically active they have a hard time maintaining residue, Jasa isn’t too worried about them losing some residue.

“Because that residue is being recycled, the nutrients in that residue are becoming available for the next crop,” he says. “So I’m not too concerned about that. Now, if you need it for erosion control or for moisture conservation, that’s where those carbon cover crops become vital.”

While there is some concern that cover crops can use up moisture, Jasa says that it depends on your location. But if a grower selects the proper cover crops, he shouldn’t be losing more moisture than is lost to evaporation. “Bare soil evaporation is much higher than people ever thought.”

Cover crops can also slow acidification that occurs from surface-applying fertilizer, says Ward. While the calcium-magnesium in corn stalks will help slow it, broadleaf covers contain a lot more calcium-magnesium than grasses, which can help slow it even more. He adds that growers using legumes as covers normally don’t need to apply as much nitrogen to the following cash crop, which also helps slow acidification.

But even if soil moisture and acidification aren’t concerns, no-tillers may still want to add cover crops into their systems for their soil health benefits, which in turn improves nutrient uptake.

Ward says that covers help soils get their mycorrhizae established, which does most of the nutrient feeding for the crop roots.

“Their threads and hyphae get out and pull those nutrients into the plant,” he explains. “The plant provides the food for the mycorrhizae, so the mycorrhizae can bring the nutrients to the plant. So if you’ve stopped doing any tillage, that mycorrhizae should be developing, and that would be helping nutrient uptake in that topsoil.”

He notes that soil health is critical in how plants uptake nutrients, so if a grower hasn’t developed the soil health yet, then the plants may not be able to uptake those nutrients, regardless of how and where the fertilizer is applied.

One warning both Ward and Jasa would like no-tillers to heed is the notion that they can heavily reduce or even eliminate fertilizer as their soil health improves.

Ward says that aside from nitrogen and some sulfur, which plants can acquire from the air, most nutrients that are removed from the soil will need to be replaced.

“When you take something off the land, you take nutrients off,” he says. “So you need to either put that back with manure or compost, or you need to use fertilizer.”

The paper by Grove, Ward and Weil recommends ensuring an adequate or slight surplus of nutrition using shallow subsurface placement or surface applications.

Jasa does note that in drier climates, he prefers to place fertilizer in the soil when possible. But as long as there’s adequate residue left, he’s not too concerned, because the moisture should be there to carry the nutrients into the soil.

Ward also mentions that areas like the Palouse region in the Pacific Northwest can have dry topsoil from limited moisture, so growers usually put their fertilizer 4-5 inches deep in the soil where moisture is still available.

“Now we’re doing no-till, so that’s changed that dynamic some,” he says.

Farmers growing crops that are sensitive to residue also may need to adjust their fertilizer strategies, Jasa says. Canola in particular, he explains, is sensitive to too much residue because the canola seedlings are so small.

“Canola tries to get above the residue. It’ll grow real fast, have a long stem there, and the frost can kill it.”

His recommendation to farmers growing canola and other residue-sensitive crops is to put some fertilizer down in a starter application during planting.

“I’m a firm believer in starter fertilizer being placed down in the soil with the seed to get that crop started,” he says. “Because in those early first couple weeks of growing, roots aren’t out there in the row middles where the residue is protecting the soil or keeping the moisture there.”

So if a no-tiller is running row cleaners on his planter to push the residue away, it’ll provide a bare strip of soil that will warm up and dry out. “When it dries out, the nutrients better be in the soil itself there,” Jasa says.

Despite some suggestions that no-tillers should be soil sampling at shallower depths because of stratification, when it comes to taking soil tests for fertilizer recommendations, Ward does not recommend no-tillers do anything different.

The reason for this is due to how the soil tests are calibrated. While in Nebraska the tests are calibrated for an 8-inch depth, in most states it’s a 6-inch depth. If a grower submits a sample that’s at shallower depth, the calibration will be off, Ward explains. And because the nutrient concentration is higher at the top, he may get a lower fertilizer recommendation than what is needed and end up under-fertilizing his crop.

“The roots grow down 4 to 6 feet deep in the soil,” Ward says. “So we’re estimating from the top 6-8 inches of soil what that plant needs, when it’s growing 4 to 6 feet. So if you start sampling different depths, you’re going to get a different reading than if you were to sample 0 to 6 inches or 0 to 8.

A common concern growers may have when they move to a no-till system is nutrient stratification.Without tillage to mix fertilizer into the soil, no-tillers may wonder whether the nutrients applied to the soil surface are reaching the crop roots. According...