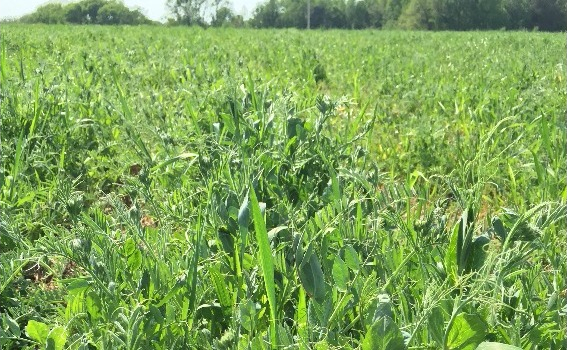 A multi-species blend of wheat, vetch, winter peas and clover that was planted in October.

In the past few years, we have made a concerted effort to increase the usage of cover crops and other conservation practices on our farm. I have learned a lot of lessons from this experience but one stands out above the rest. Being a good steward of the environment and aiming to produce high yields don’t have to be mutually exclusive. In fact, I would argue that if intensively managed, conservation practices should significantly enhance yields.

The cornerstone of any good crop production system involving conservation techniques is the establishment of cover crops. Cover crops have traditionally been thought of as a defensive measure... a way to protect crop yields during dry spells, a way to protect soil from erosion and a way to shade out competing weeds like palmer amaranth. But while the defensive qualities of cover crops are certainly great, what excites me the most about cover crops is actually their ability to enhance crop yields, especially in years where weather conditions are already favorable.

Cover crops’ ability to take a good crop yield and make it great can be explained by considering the framework of something known as Liebig’s Law of Minimum, which can be summarized as “If one of the critical nutrients or soil conditions is deficient, plant growth will be limited even if all other critical nutrients and soil conditions are abundant.” It can be best visualized by looking at a picture of a barrel with staves of different lengths. Despite other stave heights being full, you can’t fill the barrel with water any higher than the most limiting stave. 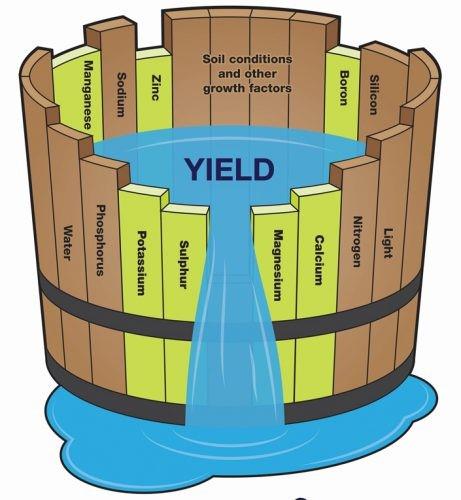 So what does this have to do with cover crops? As mentioned above, in years where water is your limiting factor cover crops can help mitigate some of the water stress by increasing the soil’s water holding capacity and also by providing shade to the soil surface. Here are some interesting facts regarding soil temperature courtesy of NRCS:

● At 70 degrees soil temperature, 100 percent of the soil moisture is used for plant growth.

● From 95 to 113 degrees, 15 percent of soil moisture is used for plant growth and 85 percent for evapotranspiration.

How often do our soils approach the critical temperature state during the hot summer months in SC? The presence of a thick stand of cover crops can help ensure that soil moisture isn’t the limiting factor to your field crops. If soil moisture isn’t that limiting factor, then how do you ensure that nutrients are abundant enough and don’t become that limiting factor themselves? One option is to fertilize to the highest yield potential of the crop, but the obvious issues with doing that are excessive cost and nutrient runoff/leaching. Once again, cover crops can play a role in helping our crops reach their highest potential yield. Cover crops help row crops access additional nutrients in the soil profile through four different biological processes: 1) The breakdown of carbon from decaying cover crop residue, 2) Roots from the cover crops produce “exudate acids” which convert minerals in the soil into plant available nutrients 3) The cover crops act as a host plant for arbuscular mycorrhizal fungi, which are microbes that have a direct effect on plant health and nutrient storage capacity of the soil within the root zone of the plant and 4) By producing additional Nitrogen with leguminous cover crops. While I do not believe the cover crops are a complete substitute for traditional fertilizer programs, I do believe that they are a great compliment and can serve to enhance the nutrient bank available to your crops. They can raise the bar on what the limiting factors affecting your crop are within a given year. 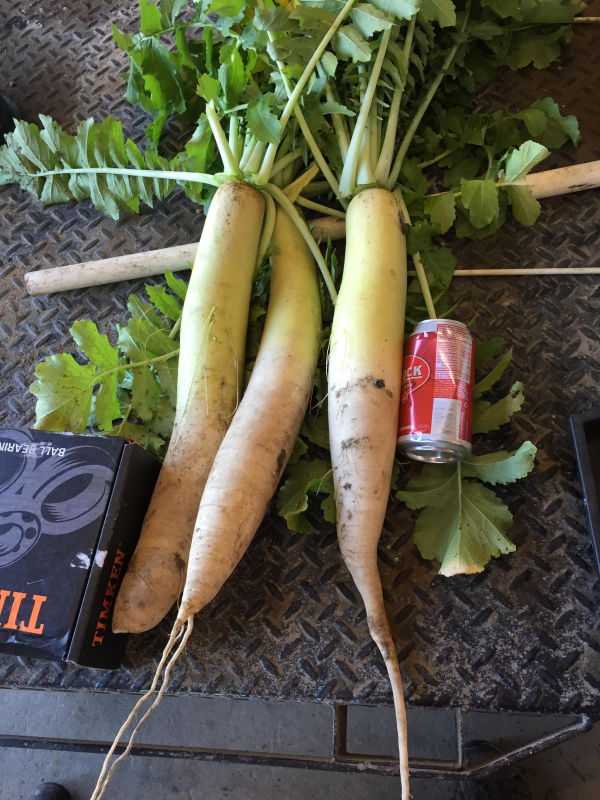 So if you’re interested in incorporating cover crops into your row cropping system, here are some tips that I’ve learned through both good and bad experiences on our farm.

● Utilize multi-species mixes to get the best synergies of biological interactions. For example, brassicas can suppress nematodes, legumes produce nitrogen and small grains are good mycorrhizal hosts. To find a good seeding rate, take the normal planting rate used for each seed type and divide it by the number of species within your mix.

● Limit your costs by saving seed to re-blend, especially small grains, but don’t skimp on seeding rate. The best case scenario is to balance out your blend amongst each species but if costs are prohibitive it’s better to increase the rate of small grains than to just use a lower overall rate.

● Try to plan in advance your crop rotations so that your cover crops complement your cash crops and don’t inadvertently suppress them. For example, you do not want to plant legumes immediately prior to or behind a leguminous cash crop such as peanuts and soybeans because it could lead to disease issues.

● Make it a goal to have a living root in the soil for 95% of the year. If you can do that, the biological activity mentioned above never stops and your crops are the beneficiaries.

● Getting good seed-to-soil contact can be a challenge when planting into thick cover, but the cover crop’s root fibers can help prevent soil crusting so don’t be afraid to plant slightly deeper than normal.

● Lastly, have a long-term perspective. While cover crops can certainly have an economic benefit in the short term, it’s the biological activity over the long-term that really improves your soil and yields. This is especially true here in our sandy, low CEC soils.

Adding multi-species cover crops to our farm has been a fun learning experience and has improved our soil quality and yields. There is still so much to learn and I’m sure our practices will evolve with experience and increased knowledge. If you are interested in giving multi-species cover crops a try, I’d encourage you to stop by the NRCS office in Bennettsville and speak with Frank Stephens about potential conservation programs that can help you get started. Remember, if you take care of the land, the land will take care of you.

In the past few years, we have made a concerted effort to increase the usage of cover crops and other conservation practices on our farm. I have learned a lot of lessons from this experience but one stands out above the rest. Being a good steward of the...

The Tax Benefits of Conservation Easements

Conservation easements have grown in popularity in recent years, partly due to t...