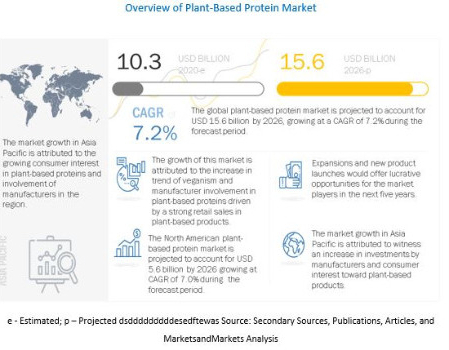 The plant-based protein market is projected to grow at a CAGR of 7.2% during the forecast period

By application, the food segment is projected to dominate the plant-based protein market throughout the forecast period

The food segment is projected to dominate the plant-based protein market, by application, in terms of value, due to their extensive use in human nutrition. Plant-based protein is incorporated in food to add nutritional value to various food products. Different product sources are developed into types such as isolates, concentrates, and even textured proteins, which can be utilized in different types of plant-based foods, including dairy and meat alternatives, ready meals, confectionery, and other food types.

By from, the liquid segment is projected to grow at the highest growth rate during the forecast period

The liquid segment is projected to grow at the highest growth rate due to its major use in plant-based dairy, food & beverages, and nutritional supplements such as shakes and other healthy beverages. Wet/liquid form of processing is a mainstream technology used for producing plant-derived protein isolates. This form of processing involves the consumption of copious amounts of water and energy. During the extraction of the protein, the source crop is dispersed in water so that other components, such as carbohydrates, are also extracted through ultrafiltration or iso-electric precipitation. With the growing demand for plant-based protein in the food and feed segments, the demand for plant-based protein that is obtained through wet processing is projected to remain high during the forecast period.

The Asia Pacific region is projected to record the highest growth during the forecast period. The rising vegan food consumption has led to an increased demand for plant-based food. The feed sector is also growing in countries such as China, India, and Japan, which aids the growth of the plant-based market in the region. Some of the leading players operating in the region include Herblink Biotech Corporation (China) and ET Chem (China). Apart from regional manufacturers, major foreign players such as Cargill (US), DSM (The Netherlands), and ADM (US) have established their production and research & development facilities in countries in the Asia Pacific region.