When you picture what’s happening below ground in your fields, you probably imagine a web of roots branching out to provide your crops support, nutrients and water. But root growth isn’t the only thing happening beneath the surface. Roots are also secreting chemical compounds, known as root exudates, which play an important role in both crop production and soil health.

Released primarily from the root hairs and cells immediately behind the penetrating root tip, says an Agronomy for Sustainable Development article, root exudates attract and sustain a variety of microorganisms, like arbuscular mycorrhizal fungi and nitrogen-cycling bacteria, in the rhizosphere, which is the zone of soil directly surrounding the roots.

When explaining exudates, Paul Hallett uses a quote from the English agriculturist Jethro Tull’s book, Horse-Hoeing Husbandry: “Roots are but guts inverted…that spew out what is superfluous.”

“The roots are excreting compounds into the soil, which allows the plant to either access nutrients directly, just by interacting with soil mineral particles, or through fueling microbial activity,” says the University of Aberdeen soil scientist. “That’s the primary reason the plants would put effort into creating them.”

In addition to benefiting the plant itself, root exudates can both affect the soil and be affected by it. They also vary by plant species, and could provide untapped potential from plants in the future of crop breeding.

Here’s what you should know about root exudates.

Along with other researchers in a UK wide project, Hallett has been studying the physical effects of root exudates and says they have a range of impacts on the soil — one of which is a dispersion mechanism.

“Particularly organic acids that get produced by roots, what we’ve found in our work is that they weaken soil,” he says. “If you imagine you’re a growing root, and you’re putting a bit of pressure on the soil, it’s going to be easier for you to grow.”

There’s also the potential that in weakening the soil for root growth they break apart soil molecules and expose nutrients they wouldn’t have been exposed to before, he adds.

Some plants will produce more sticky root exudates made of polysaccharides, which are essentially sugar molecules bonded together. This allows the plant to trap water, which improves their drought resistance and makes it easier for them to take up water. Hallett says they also aggregate particles, which are probably very useful for structuring the rhizosphere.

“And with either of the compounds, what happens is they’re food for microorganisms,” he adds. “So a lot of the effects I’m talking about would be very, very short lived in soil. Microorganisms will consume them and a lot of it will get respired off as carbon dioxide”.

However, even though exudates may not exist in the soil for long, Hallett explains that the soil will still be left with what the microbes produced from consuming them.

“These will generally be much longer-chain polysaccharides, which are very good at aggregating soil and trapping water, and they help create this unique zone around the root, which lets it function a lot better.” 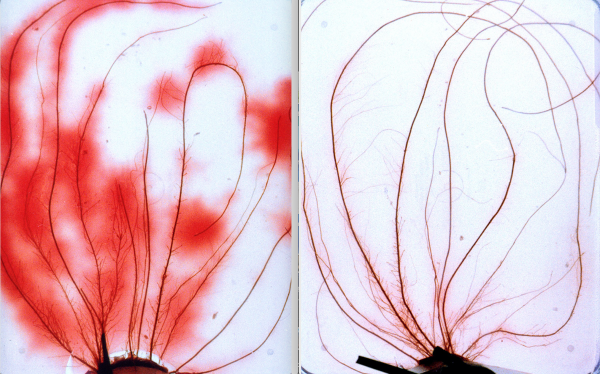 These photos show the difference in how tall fescue responds to fungus through root exudation. In the left photo of the fungus-infected soil, fescue produced more root exudates than it did in the right photo, which was fungus-free. Photos by Photo by Darius Malinowski, USDA Agricultural Research Service.

Root exudates can perform differently depending on the soil type. Clay soils, in particular, provide more surface areas and sites for the compounds to interact with, which means plants will probably need a larger volume of exudates to affect the soil than they would in a sandy loam soil, Hallett explains. A sandier soil has less clay to strengthen soil structure, so the bonding of soil particles by the exudates is going to be more important.

“The soil itself is going to affect exudation — I don’t think anyone really knows by how much,” he says. “A lot of that is going to be driven by fertility of the soil and also how dry and compact it is.”

Hallett explains that in low phosphorus soils, there may be more effort into producing exudates and root hairs to extract compounds from the soil. “If you pull a plant out of the soil, the amount of soil that’s going to be stuck to the roots is going to be bigger in a low phosphorus soil because it’s putting more effort into trying to manipulate the volume around the root.”

Plants have also been measured to excrete more carbon in dry, compacted soils, which means they’re producing more exudates to help push the root through the soil and capture water.

In fact, a recent study published in New Phytologist suggests that “plants change the composition of their root exudates to increase microbial activity after drought.”

They study looked at two common grassland species that differ widely in growth strategies and root systems under two weeks of drought, and found that root exudates from the plants that experienced drought triggered more soil respiration than exudates from undroughted plants.

“Importantly, this increased respiration compensated for the lower rates of root exudation in droughted plants,” researchers say, concluding that plants have a novel mechanism for stimulating microbial activity to overcome adverse environmental conditions.

Why Root Exudates are Important Year-Round

Given the benefits root exudates have on the soil, what happens during fallow periods when the soil is not receiving them?

Hallett says that without root exudates, the microbes don’t have anything to eat. This can also compromise the soil structure.

“You just decreased their substrate substantially,” he says. “If roots aren’t there themselves, interacting with these exudates, you also have soil that’s much more prone to erosion. It’s not being held together. Not having exudates is a big issue.”

That not only hurts the soil but future crop production as well. Hallett says that what comes before a crop has a big impact on how another crop performs.

“Obviously with a soil left in fallow, it’s going to lose carbon and be poorer for agriculture,” he explains. “I think there’s a huge benefit to these compounds being in the soil, most of it is because they’re fueling the microbial community, and that microbial community is helping to drive things like nutrient cycling, and also because it helps to restructure the soil, make it more stable with a better physical environment.

“The more you’ve got something contributing to the soil, the better.”

While having roots in the ground as often as possible is a good practice to start — whether that’s through using cover crops or intercropping — if you can use species that have different rooting depths, that’s even better.

Hallett says that when you have roots that grow to different depths, the plants are occupying different niches within the soil profile, so they’re able to access different pools of nutrients and water.

“Something with shallow rooting is going to be much better at capturing phosphorus than something that’s deeper rooting, which is better at capturing nitrogen,” he explains. “They’re performing different services in the soil and the roots are going to decompose and then biological activity or tillage will mix that material around as well.”

And having root exudates at different depths means they’re hitting different zones in the soil, so they’re dispersing and aggregating the soil at those varying depths and changing the soil structure throughout the soil profile.

Part of Hallett’s work has included looking at root exudates between different plant species. He’s studied the exudates of corn and barley and found corn’s root exudates were better in increasing how well soil particles bound together, and impacted soil water capture better than barley exudates.

Scientists have also found that some species exudates have allelopathic effects, which can be beneficial in controlling weeds. University of Vermont says that cereal rye’s exudates inhibit germination and growth of weed seeds, while a study by researchers in Switzerland found that buckwheat’s inhibited pigweed root growth by 49%.

While root exudates of different species continue to be studied, Hallett believes it’s too early for farmers to try to focus on selecting species specifically for their root exudates.

“I think the rooting structure is going to be far more important than the exudation that’s occurring,” he says, adding that it’s not understood well enough for farmers to think about exudation directly.

However, he thinks this might be changing, especially in terms of breeding different crop varieties. When talking with crop breeders, he says most wonder about how much root exudation varies within a species. From an initial screen, it doesn’t appear to be a big difference in terms of physical impact. But there does appear to be a big difference in root exudates between species, which nobody has appreciated in the past, he says.

“I think the next frontier now is to really start screening what’s going on belowground, trying to explain why one crop would be really good for nitrogen use efficiency and a lot of things will be driving that,” he says. “Root architecture will be the greatest, but exudation will have a role in that. It’s just one of the many things that can be explored as a way to make farming more sustainable and profitable at the same time.”

When you picture what’s happening below ground in your fields, you probably imagine a web of roots branching out to provide your crops support, nutrients and water. But root growth isn’t the only thing happening beneath the surface. Roots are also...

Many farmers across the U.S. experienced wet weather last growing season. Accord...