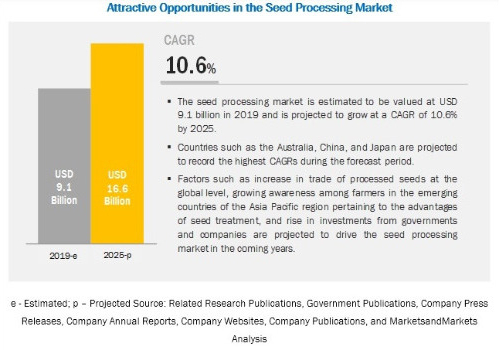 The seed processing market is estimated at USD 9.1 billion in 2019 and is projected to reach USD 16.6 billion by 2025, recording a CAGR of 10.6% during the forecast period. The global seed processing market is projected to grow in the coming years due to the increased trade of processed seeds at the global level, growing awareness among farmers in the emerging Asia Pacific region pertaining to advantages of seed treatment, and rise in investments from governments and companies.

The molluscicides market is estimated to be USD 711 million in 2021 and is proje...

The inoculants market is estimated to reach USD 924 million in 2020 and is proje...