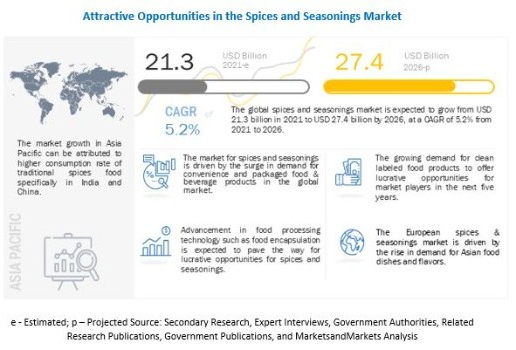 The global spices and seasonings market is expected to grow from USD 21.3 billion in 2021 to USD 27.4 billion by 2026, at a CAGR of 5.2% from 2021 to 2026. Globally, the spices & seasonings market is driven by the growing demand for convenience food products, clean label trends, and natural preservatives for the meat industry. However, the growing incidences of adulteration and contamination in the spices exported from developing countries such as India and China are prompting regulatory bodies in Europe and America to strengthen the safety regulations on imported spices and seasonings. Growth in food product innovations to incorporate natural ingredients, increase in demand for health and wellness products, and rise in demand for ethnic and authentic food products are emerging opportunities for the spices & seasonings market.

Compared to Western countries, the level of foods processed in Asian countries, which are growing economically, is low. However, they are experiencing positive market forces due to which the processed food industry is expected to prosper in the near future. Unlike Europe and North America, where a majority of spices and seasonings are consumed by the meat industry, in the Asia Pacific region, convenience food products consume the majority of spices and seasonings.

On the basis of type, the spice market has been segmented into pepper, capsicum, ginger, turmeric, coriander, cumin, nutmeg & mace, cardamom, cinnamon, and other types. The ginger segment accounted for the largest share of 37.7% of the global spice market in 2020. Most spices have the largest market share in Asia Pacific. This is because more spices are used in hot climates due to their antibacterial properties that rid foods of pathogens and thereby contribute to human health, longevity and reproductive success. The rapidly growing fast food industry and increasing demand for convenience food have led to an increase in the demand for spices and seasonings such as paprika, pepper, oregano, mint, and sesame. In terms of consumption, the demand for turmeric has always been high and is further increasing, especially in Asian countries due to the medicinal properties of turmeric and its extensive use in Ayurvedic medicines and Indian cuisines.

The meat & poultry segment accounted for the largest share in the global spice market in 2020. It accounted for a share of 26.6% in 2020 and is projected to grow at a CAGR of 4.4% during the forecast period. Beverages form the fastest-growing application of spices and seasonings, and this segment is projected to grow at a CAGR of 6.3% between 2021 and 2026. The increasing population, changing lifestyle trends, and rise of disposable income of people, particularly in developing economies such as China, India, and Brazil, has led to increased consumption of snacks & convenience food items.