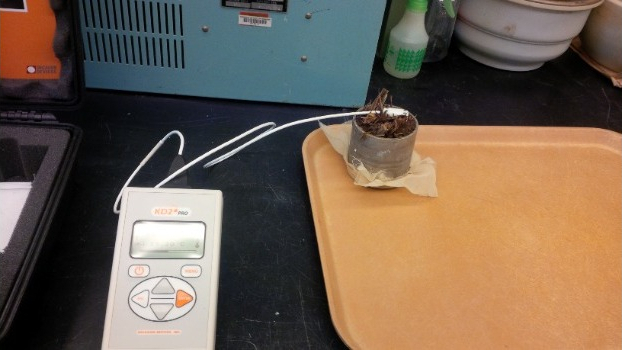 You can pick the right seed, use the right equipment, apply the right inputs, and plant at the right depth, but without the right soil temperature, your crops are likely to struggle. One practice that can help fix that? Cover crops.

While soil temperature has an impact on the soil and crop production throughout the growing season, the NRCS says it’s most critical at planting, when it drives seed germination and directly affects plant growth. “Most soil organisms function best at an optimum soil temperature,” says the USDA agency, adding that soil temperature influences soil moisture content, aeration, and the availability of plant nutrients.

This graphic from the NRCS shows what happens to plants and soil life based on the soil temperature.

The soil has to warm up to a certain degree for plants to get off to a good start, but if it continues to heat up and does so rapidly, that can harm plant growth. Samuel Haruna, a soil scientist at Middle Tennessee State University, says if the soil is too hot, seeds won’t germinate or their roots will die. Rapidly warming soils also puts an added time crunch on farmers during the already busy planting season.

The goal for farmers then is to keep the soil temperature as stable as possible for as long as possible. Growing cover crops before the planting season is one way to help ensure that.

To understand how cover crops can buffer against rapid changes in soil temperature, we first need to understand what causes soil to warm up quickly.

There are a few factors that impact soil temperature, the biggest one being the atmosphere. As we see the climate gradually warming and seasons becoming hotter, that has a direct impact on the soil temperature. But if a soil is dry and compacted, it’s even more susceptible to those temperature changes. Haruna says this is because when soil particles are closer to each other, the better the soil is able to transmit heat, while water helps to buffer against any rapid heat change.

Because cover crops have the ability to improve soil moisture retention, break up compaction, and increase organic matter and carbon, Haruna theorized that it was a management practice that could help buffer rapid temperature changes.

He conducted two studies to test this theory. One was conducted with a three-way cover crop mix of hairy vetch, Austrian winter peas, and cereal rye on a no-till field in Missouri, while the other was conducted on a no-till field in Tennessee with just winter wheat. Both fields had silt loam soil and average soil organic matter levels — around 2-2.5% for the Missouri field and 1.8-2% for the Tennessee field. Both fields also had an uptick in clay: the Missouri field had a claypan, while the Tennessee field had a fragipan.

The cover crops were terminated with a roller-crimper to incorporate the covers into the soil to help increase soil organic matter and carbon. Haruna collected soil samples after the cover crops were terminated and about a week before spring planting to study thermal conductivity and heat capacity in the lab. A higher thermal conductivity means that whenever the atmosphere warms up, the soil temperature will change very quickly, Haruna explains, while a higher heat capacity is the ability of the soil to keep the temperature more stable.

In both studies, Haruna saw similar results: cover crops reduced the soil’s thermal conductivity and increased its heat capacity over the control no cover crop field, which means they buffered extreme changes in soil temperature and kept it more stable.

Haruna notes that these tests were conducted in the lab with soil samples collected from the field, so his next step is to see how this plays out in the field throughout the growing season. He received a grant from Southern SARE and will be starting new studies in the fall of 2020.

How to Use Cover Crops to Protect Your Soil Temperature

The first step is to make sure your tillage practices aren’t working against you.

“If you’re tilling the soils, you’re aerating it quickly,” he explains. “The moment you aerate it quickly, the more soil water will be lost. This will encourage more microbial activity , which will break down the organic matter content quickly. It is this loss of soil water and organic matter that can contribute to rapid soil temperature change.”

He says the more destructive your tillage is, the more you reduce the benefits of your cover crops.

“If you’re doing something like a moldboard plow, where you go in and rip the soil, then any benefit you tend to accrue from using cover crops will almost be eliminated,” he explains. “Most of it will be eliminated.”

The more you scale down your tillage, the more benefits you tend to retain, which is why no-till is the ideal tillage practice for stabilizing soil temperature and the reason he chose the practice for his two studies.

“The less destroyed the soil is for a longer period of time, the more benefits you should accrue from using cover crops on soil temperature,” Haruna says.

The second step is to make sure you’re selecting a species that will produce a lot of biomass.

“The amount of benefit you get from using cover crops is directly proportional to the biomass you’re getting,” Haruna says, explaining that the more biomass a species produces, the more it helps increase organic matter. A species with a lot of leaves, stems and roots tend to produce more benefit compared to those that don’t produce as much biomass.

“You want something that won’t break the bank, but that can also provide some of the benefits,” he says.

Haruna says he chose cereal rye, hairy vetch and Austrian winter peas for the Missouri study because those species are hardy and can be grown in different parts of the U.S., which would make it easy for others to replicate his research if they wanted to. For the Tennessee study, he went with winter wheat because it’s the most common cover crop species grown in the state.

What if I Want My Soils to Warm Up?

For Haruna’s location and those in the South, soil warming too quickly is the biggest concern when it comes to soil temperature. But for farmers in northern climates, the challenge may be that soils stay too cold and wet during the planting season.

Many farmers believe that no-tilling and using cover crops will only compound this problem, but there is research that suggests otherwise.

In 2014, Ryan Stockwell, a Wisconsin farmer and former director of sustainable ag at the National Wildlife Federation (NWF), conducted an experiment that proved the belief that cover crops and no-till keep the soil too cold is a myth.

Starting in April, he took 4-inch depth samples in random locations on his no-tilled field where a radish cover crop had winterkilled, his neighbor’s fall-tilled fields across the fencerow, as well as his lawn, to provide a baseline.

“Thanks to no-till and cover crop roots, I am slowly breaking through the plow pan located about 16 inches below the surface,” he wrote in the NWF blog post. “That plow pan, intensely present in my neighbor’s soil, prevents excess moisture from draining away.”

Other research has shown slightly different results. Iowa State University agronomist and extension soil and water specialist Mahdi Al-Kaisi shared results from a study conducted in May 2018 which found that cover crops may be more beneficial in raising soil temperature on no-till fields than conventional tillage. 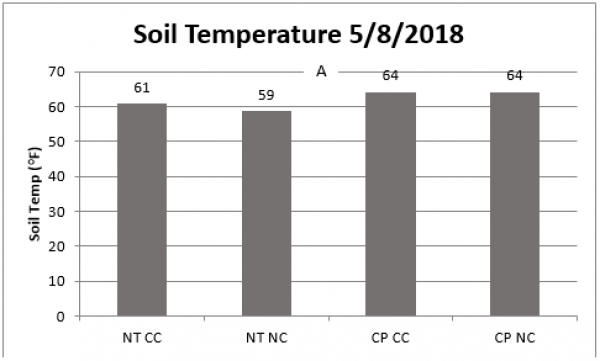 They also saw that soil moisture was higher under the no-till system, but less where the rye was.

“Soil temperature is highly influenced by soil moisture conditions, and any practice that removes excess moisture, especially early in the spring, can improve crop establishment and potentially reduce the effect of soil-borne diseases driven by cold temperatures,” writes Al-Kaisi. 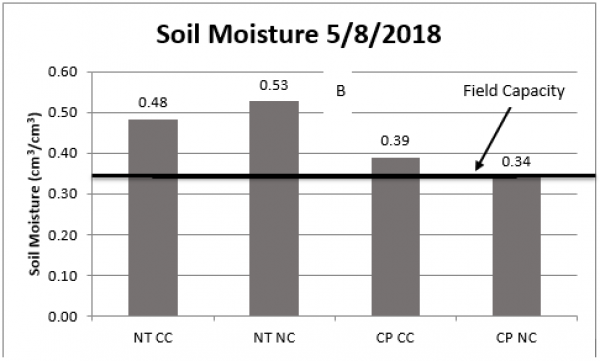 Haruna agrees that growers with too cold soils can still use cover crops to help warm them by changing their management so the cover crops grow longer.

“Those living plants can help take water out of the soil and transpire it back into the atmosphere,” he says, which will help dry out the soil and in turn warm them up quicker.

Planting green is one option that will let cover crops grow longer, but due to the higher level of management required, it’s not a practice Haruna universally recommends. If that is a practice you are interested in, he advises reaching out to your local university extension or NRCS office to get guidance and advice that’s tailored specifically to your operation.

Use Cover Crops, Regardless of Soil Temperature

While Haruna’s research has largely focused on soil temperature, he doesn’t want farmers who aren’t concerned about that aspect of the soil to overlook the other benefits cover crops offer.

“The soil temperature is just a small aspect of ensuring the farm is productive as long as possible,” he says. “As far as the economics and skill level allows, incorporate cover crops as much as possible.”

For more information on using cover crops, see the AgFuse Cover Crops page or check out the following articles:

You can pick the right seed, use the right equipment, apply the right inputs, and plant at the right depth, but without the right soil temperature, your crops are likely to struggle. One practice that can help fix that? Cover crops.Why Soil Temperature...