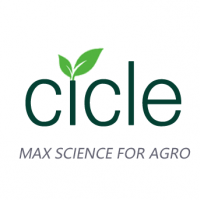 In June 2021, Fanxiao Meng from Shandong Agricultural University published her master's thesis on "Study of Alginate Oligosaccharide Induced Disease Resistance in Plants", which investigated the role of fucoidan in inducing disease resistance in plants and its molecular mechanism by using potato X virus (PVX), tobacco mosaic virus (TMV) and pathogenic blight as control targets. The results showed that fucoidan activates the SA signaling pathway by promoting the increase of salicylic acid (SA) content in plants, which directly activates the expression of downstream defense genes and thus enhances the disease resistance of plants.

1. Effect of different concentrations of Alginate Oligosaccharide (AOS) on the control of potato X virus (PVX) 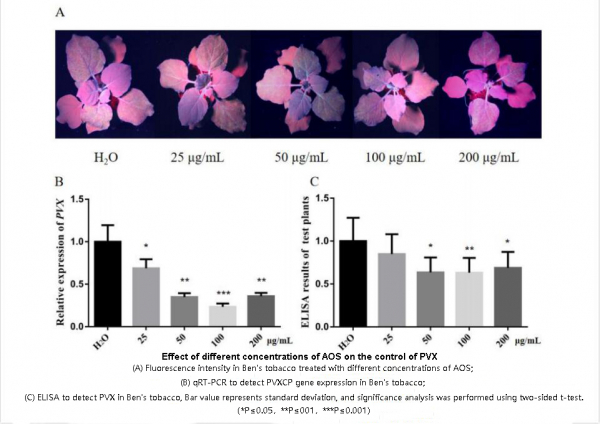 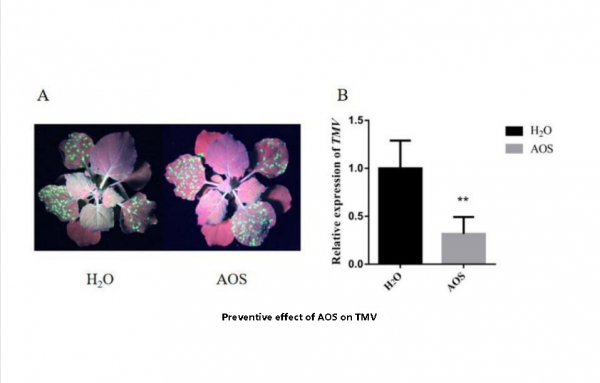 The test was still sprayed with Ben's smoke at a concentration of 100 μg/mL and inoculated with TMV with GFP fluorescent label 24 h later.

At d 8, the fluorescence intensity of the upper leaves of AOS-sprayed Bentham was significantly lower than that of the H2O treatment, indicating that AOS enhanced the resistance of Bentham to tobacco mosaic virus and that the resistance to the virus was generalized.

3、AOS enhances the resistance of plants to pathogenic blast 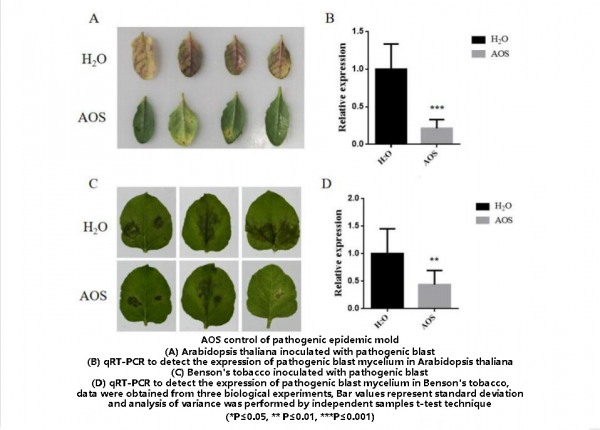 As can be seen from the table, compared with the H20 treatment, the leaves of AOS-treated plants produced a smaller area of disease spots, the phenomenon of yellowing and wilting was significantly reduced, and the growth of disease-causing mycelium in the plants was significantly lower than that of the control, indicating that AOS could enhance the tolerance of the plants to disease-causing blast.

Study on the mechanism of AOS-induced resistance in plants

(1) After inoculation with PVX, the salicylic acid content was significantly up-regulated in the AOS+PVX group, indicating that AOS can initiate the resistance induction response by up-regulating salicylic acid (SA) content.

(2)The expression levels of NPR1 and PR1 protein genes in AOS-treated tobacco leaves were significantly higher than the control when the recognition receptors on the plant cell surface recognized the pathogen infestation, indicating that AOS could promote the expression of NPR1 and PR1 protein genes through the salicylic acid (SA) signaling pathway, thereby enabling the plants to acquire systemic resistance and enhance resistance to the virus.

(3) The same concentrations of AOS and H2O were sprayed as control, and PVX with GFP fluorescent label was inoculated after 24 h. After 5 d, it was found that the fluorescence intensity of systemic leaves of non-transgenic Ben's tobacco sprayed with AOS decreased significantly compared with plants treated with H2O. qRT-PCR detection of virus accumulation was consistent with the phenotype, indicating that AOS induced resistance to the pathogen through the SA signaling pathway.

In summary, AOS can promote the synthesis of salicylic acid through the ICS pathway, activate the SA signaling pathway, and induce disease resistance in plants. It can also be used as a novel plant vaccine with promising applications in areas such as resistance in response to biotic and abiotic stresses.

In June 2021, Fanxiao Meng from Shandong Agricultural University published her master's thesis on Study of Alginate Oligosaccharide Induced Disease Resistance in Plants, which investigated the role of fucoidan in inducing disease resistance in plants and...

18 years ago, we bought our first self-propelled sprayer and it revolutionized a...

A common concern growers may have when they move to a no-till system is nutrient...

Do you know 5-ALA ?Study on the Effect of Different Concentrations of 5-ALA on Yulu Fragrant Pear

In July 2021, Liu Huifang of Shanxi Agricultural University and others published...

With the recognition of farmers for water-soluble fertilizers with a large numbe...

The wonderful use of alginate oligosaccharide ！

What is Alginate oligosaccharides?