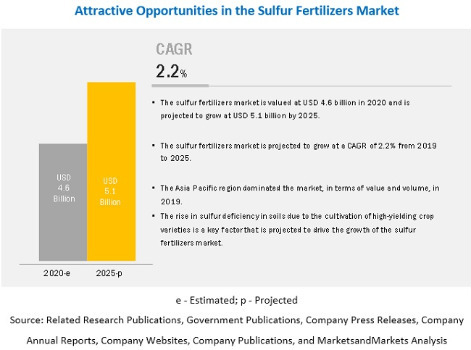 The increase in agricultural practices and requirements for high-quality agricultural produce are factors that are projected to drive the growth of the market in the Asia Pacific region. According to the World Bank, nearly 56.2% and 60.4% of the entire land area accounted for agricultural production in China and India, respectively, in 2015. Major crops produced in Asia include rice, sugar beet, fruits & vegetables, cereals, and grains; the region consumes nearly 90% of the global rice produced. There is a high demand for sulfur fertilizers in Asia Pacific due to its direct use to treat sulfur deficiencies. They are often sprayed in combination or as additives to NPK products.

Key players in this market include Nutrien, Ltd. (Canada), Yara International ASA (Norway), The Mosaic Company (US), ICL (Israel), and K+S Aktiengesellschaft (Germany). These players are focusing on increasing their presence through undertaking expansions & investments, mergers & acquisitions, partnerships, joint ventures, and agreements. They have a strong presence in North America, Asia Pacific, and Europe. In addition, they have their manufacturing facilities, along with strong distribution networks, in these regions.

In 2025, the sulfates segment is projected to dominate the global market in terms of value. This is due to the high consumption of traditional and new sulfate fertilizers, such as ammonium sulfate, single superphosphate, ammonium phosphate sulfate, potassium sulfate, and sulfates of micronutrients, across regions. In addition, the main advantage offered by sulfate fertilizers is its sulfur supply in the form of sulfate, which is readily available to plants.

The dry segment is projected to dominate the market due to its extended shelf life and relatively low cost. In addition, the consumption of the dry form of sulfur fertilizers, such as ammonium sulfate, single superphosphate, ammonium phosphate sulfate, and elemental sulfur, is high across the globe. These factors are projected to drive the growth of the market.

The global sulfur fertilizers market is estimated to be valued at USD 4.6 billion in 2020 and is projected to reach a value of USD 5.1 billion by 2025, recording a CAGR of 2.2% during the forecast period. Factors such as the increase in sulfur deficiencies...

The global algae products market size is estimated to be valued at USD 4.7 billi...

The global industrial hemp market size is projected to grow from USD 4.6 billion...