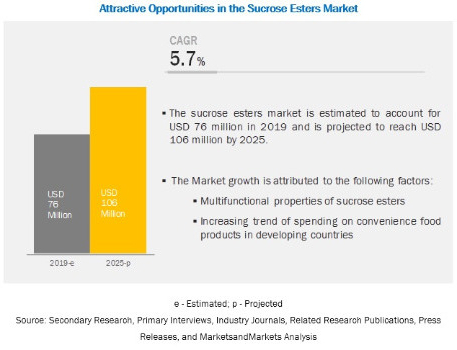 The report "Sucrose Esters Market by Application (Food, Personal Care Products, Detergents & Cleaners), Form (Powder, Liquid, Pellet), and Region (North America, Europe, Asia Pacific, South America, Rest of the World) - Global Forecast to 2025" The sucrose esters market is projected to grow from USD 76 million in 2019 to USD 106 million by 2025, recording a compound annual growth rate (CAGR) of 5.7% during the forecast period. The major factors driving the growth of the sucrose esters market include the increasing trend of spending on convenience food products in developing countries and the multifunctional properties of sucrose esters.

The confectioneries subsegment in the food segment is projected to be the fastest-growing segment in the sucrose esters market during the forecast period.

The increasing usage of sucrose esters in confectioneries is due to its sugar crystallization properties, which improves the emulsification of molten sugar and oil, and prevents adherence to the teeth, machine or wrapping papers. It helps in increasing the plasticity, softness, and chewiness of chewing gums, and majorly increases the flavor insulating properties.

The cosmetics subsegment in the personal care products segment is projected to account for a larger share in the sucrose esters market during the forecast period.

Sucrose ester is used in cosmetics, such as foundation creams, lipsticks, face cleansing creams, and eye makeup cosmetics, which include eye shadow, eyeliners, and eyebrow products. Sucrose esters in cosmetic products help to thicken oils and silicon oil used in manufacturing cosmetics. It helps in enhancing the properties of cosmetic products by improving the sensory properties of oil and natural butter used for manufacturing cosmetics.

The powder segment is projected to account for the largest share in the sucrose esters market during the forecast period.

The powder form in the sucrose esters market has gained significant attention from the manufacturers for its functional benefits, such as emulsification, protein protection, sugar crystallization, and aeration, as well as its role in starch interaction. The usage of sucrose esters in the powdered form is witnessed in food applications, such as bakery products, dairy products, confectionery products, and packaged meat products, as it helps to increase the shelf life of food products. These factors are projected to drive the demand for sucrose esters during the forecast period.

The Asia Pacific region is projected to be the fastest-growing market for sucrose esters during the forecast period.

The Asia Pacific region is projected to be the fastest-growing market for sucrose esters during the forecast period. The region witnesses a high demand for sucrose esters in dairy products, confectioneries, and bakery products. Furthermore, the rise in awareness about the functional benefits of sucrose esters has led to an increase in their usage in the personal care products segment. They help in improving the sensory properties of oil and natural butter, which has contributed to the growth of the sucrose esters market in countries, such as China, Japan, and India.

The cannabis market is projected to grow at a CAGR of 28.0% during the forecast ...

The global industrial hemp market size is projected to grow from USD 4.6 billion...

Nisin Market to Showcase Continued Growth in the Coming Years

The global nisin market size is estimated to be valued at USD 443 million in 202...

According to MarketsandMarkets, the global compound feed market size is estimate...