The problem with traditional Agricultural Lending

The problem with traditional Agricultural Lending is beyond Portfolio Theory, Diversification, Credit or Operational Risk, as well as Financial Servicing Capacity to service debt obligations in unpredictable markets predicated by supply and demand. Its problem is the Federal Reserve and a lack of understanding Commodity prices influenced by intermarket technical analysis conditioned to incremental, often unpredictable movements in bonds, stocks, treasuries, utilities, interest rates, and as well as international currencies pegged to the U.S. Dollar.

Federal Deposit Insurance Corporation(FDIC) has a very regulated and structurally implemented framework that governs Asset Liability Management which has a strong impact to the profitability of Agricultural Businesses where Commodity prices fluctuate according to Risk-Neutrality.

The Office of the Comptroller of the currency (OCC), Board of Governors of the Federal Reserve System (FRB), Federal Deposit Insurance Corporation (FDIC), the Office of Thrift Supervision (OTS), and the National Credit Union Administration (NCUA) (collectively, the agencies) in conjunction with the Conference of State Bank Supervisors (CSBS) are issuing this guidance to provide consistent interagency expectations on sound practices for managing funding and liquidity risk. The guidance summarizes the principles of sound liquidity risk management that the agencies have issued in the past and, where appropriate, harmonizes these principles with the international statement recently issued by the Basel Committee on Banking Supervision titled "Principles for Sound Liquidity Risk Management and Supervision

The exact roles and perimeter around Asset Liability Management can vary significantly from one bank (or other financial institutions) to another depending on the business model adopted and can encompass a broad area of risks.

The traditional Asset Liability Management programs focus on interest rate risk and liquidity risk because they represent the most prominent risks affecting the organization balance-sheet (as they require coordination between assets and liabilities). 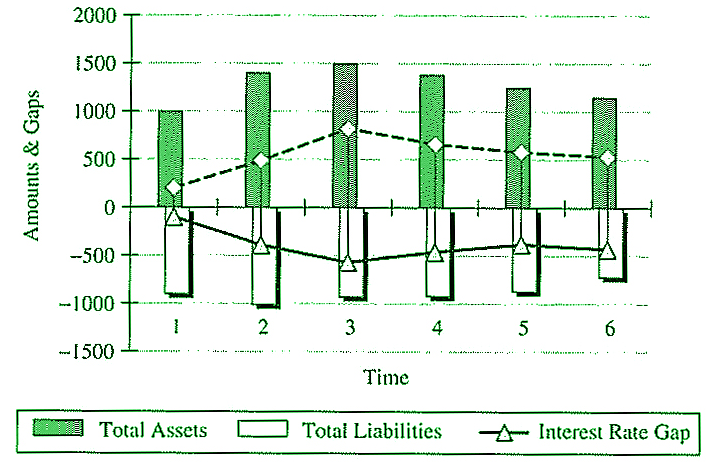 Matching Total Assets with Total Liabilities determines a methodology to calculate Interest Rate Arbitrage for Lenders and Borrowers. The difference in rates of different maturities raises the issue of the best choice of maturity for lending or borrowing over a given time horizon. An upwards sloping yield curve means that the long rates are above short rates. In such a situation, the long term lender could think that the best solution is to lend immediately over the long term. The alternative choice would be to lend short term and renew the lending up to the horizon of the lender. The loan is rolled over at unknown rates, making the end result unknown. This basic problem requires more attention than the simple comparison between short term rates and long term rates.

We make the issue more explicit with the basic example of a lender whose horizon is 2 years. Either he lends straight for over 2 years, or he lends for 1 year and rolls the loan over after 1 year. The lender for 2 years has a fixed interest rate over the horizon, which is above the current 1 year rate. If he lends for 1 year, the first years revenue will be lower since the current spot rate for 1 year is lower than the 2 year rate. At the beginning of the second year, he reinvest at the prevailing rate. If the 1 year rate, 1 year from now, increases sufficiently, it is conceivable that the second choice beats the first. There is a minimum value of the yearly rate, 1 year from now, that will provide more revenue at the end of the 2-year horizon than the straight 2 year loan.

The same reasoning applies to a borrower. A borrower can borrow short term, even though he has a long term liquidity deficit because the short term rates are below the long term rates. Again, he will have to roll over the debt for another year after 1 year. The outcome depends on what happens to interest rates at the end of the first year. If the rates increase significantly, the short term borrower who rolls over the debt can have borrowing cost above those of a straight 2 year debt.

The two options differ with respect to interest rate risk and liquidity risk. Liquidity risk should be zero to have a pure interest rate risk. If the borrower needs the funds for 2 years, he should borrow for 2 years. There is still a choice to make since he can borrow with a floating or a fixed rate. The floating rate choice generates interest rate risk, but no liquidity risk. From a liquidity standpoint, short term transactions rolled over and long term floating rate transactions are equivalent ( with the same frequency of rollover and interest rate reset). The issue is to determine whether taking interest risk leads to an unexpected gain over the alternative solution of a straight 2 year transaction. The choice depends first on expectations. The short term lender hopes that interest rates will increase. The short term borrower hopes that they will decrease. Nevertheless, it is not sufficient that interest rates change in the expected direction to obtain a gain. It is also necessary that the rate variation be large enough, either upward or downward. There exist a break-even value of the future rate such that the succession of short term transactions, or a floating rate transaction, with the same frequency of resets as the rollover transaction- is equivalent to a long fixed transaction. The choice depends on whether the expected rates are above or below such break even rates. The breaks-even rate is the “ Forward Rate” It derives from the term structure of interest rates.

Simply put the more liabilities the bank has the more valuable its assets are, because having more liabilities allows federally regulated FDIC Insured Institutions to borrow more and more money from the Federal Reserve, making itself more money, however for the agricultural business everytime it borrows more and more funds from the bank its credit rating drops from A to C paper putting itself at risk of default and eventually allowing the bank to own the Agribusiness.

We can observe the characteristic shape of average default rates of loans provided to agricultural businesses by commercial banks by detailed rating class, growing far more than the proportionally for the lowest ( riskiest) ratings. The increase in default rate when ratings decline has an exponential shape. The increase in default rate from one class to another changes drastically. In order to improve the rating by one grade, the required variation of default is around 6% for the last two classes of the scale. At the other end of the scale, a small decrease of 0.05% suffices to improve grade from Aa to Aaa. For the agricultural business with a Caa1-C rating, an analyst can observe clearly default rates are approximated at 12% to as high as 19% for a 12 month or 1 year loan.

As an Agricultural Business, you need to determine the weighted cost of capital for your debt and or equity to avoid the bankruptcies, the debt service and true economic longevity of your agribusiness. Banking is complex and do not forget interest rates are determined on the exact commodity prices your agribusiness produces, therefore to avoid these mistakes, please feel free to inquire on our site on how our program works for Agri-Finance at www.agrilend.co or email me at robertmorgan@agrilend.co a consultation is free.

The problem with traditional Agricultural Lending

The problem with traditional Agricultural Lending is beyond Portfolio Theory, Diversification, Credit or Operational Risk, as well as Financial Servicing Capacity to service debt obligations in unpredictable markets predicated by supply and demand. Its...