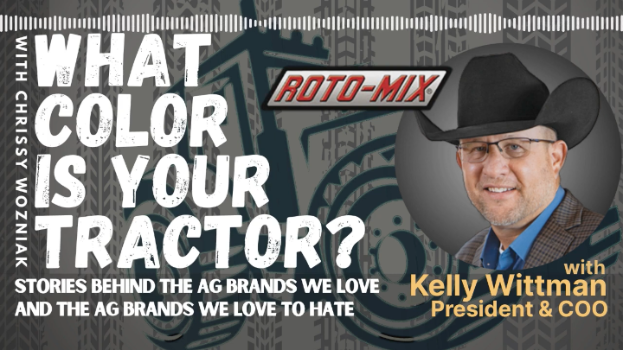 Listen to the podcast at

HOME | What Color is Your Tractor

whatcolorisyourtractor.com
In this episode, Chrissy Wozniak sits down with Kelly Whitman, President & COO of Roto-Mix.

ROTO-MIX has built its reputation as the leading manufacturer of livestock mixing and feeding equipment, compost mixing equipment and manure spreaders by continually setting standards for the industry. The company was founded in Dodge City, Kansas by Ben Neier and Bill Pullen in 1984. Since that time, ROTO-MIX has grown to include additional manufacturing facilities in Hoisington, Kansas and Sunnyside Washington as well as a retail location in Scott City, Kansas. The marketing arm has over 100 dealers providing local sales and service in the U.S. and sales in over 40 international markets. With an in-house engineering department the company’s leading edge developments specifically meet the ever-changing requirements of the cattle and dairy feeding industry. ROTO-MIX has successfully filed several patents related to the livestock mixing and feeding equipment. As important as our patents are, our most valuable commodity is our 100+ skilled and dedicated employees. Each and every one of them is committed to delivering a superior product to our dealers and end-users.

"Ben and Jim Copeland were the first two to do this and that’s why the company originally was called BJM, for Ben and Jim Manufacturing. Ben was actually the father of the feed mixer, because before Ben invented the auger box there really wasn’t any way to mix feed in the early 60s. Then he kind of decided he had something going, he had something that worked pretty good, and kind of one of those things - the neighbor sees it and he says I want one, and the other neighbor sees one and he wants one. And Ben started manufacturing the auger mixers." Kelly Whitman

Megan & Terry Buttnor moved to remote Northern Ontario in 2020, to start their n...

In this episode of What Color is Your Tractor, Jim Mandes, Northern Region Sales...