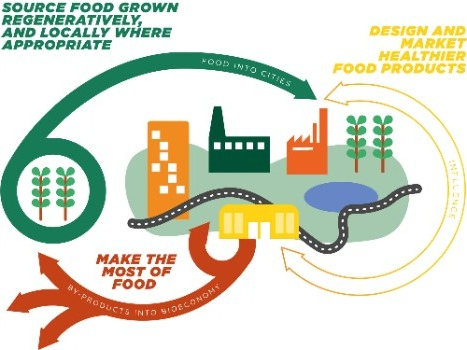 The United States is the largest producer of corn in the world. With production topping 345 million metric tons (2019 statistics from statista.com), corn has remained the backbone of American agriculture for decades. The majority of the crop is solely used for the production of biofuels such as ethanol. Other main uses are for livestock feed and exports. Only a minuscule proportion finds its way to household tables for domestic consumption.

Have you ever thought of how much wastes such a dominating industry could be generating? According to the popular ‘Science Daily’, just the sheer volume of corn stover (stalk, leaves, husks, and pretty much everything left unused after harvesting) makes up to one-third of the total solid wastes produced in the US per year.

‘Agrocycle’, an authority on the topic states that a circular economy in agriculture centers around the production of agricultural commodities using a minimal amount of external inputs, closing nutrient loops, and reducing negative discharges to the environment. In simpler terms, direct the entire crop production system in a closed-loop to reduce wastage and create sustainability in every step. This entire concept roughly follows around the principle of 3R’s – Reduce, Reuse, and Recycle.

Almost 90% of corn stover is left unused while the remaining 10% is used as bedding materials and feedstock for livestock. Corn stover is mainly composed of cellulose, hemicellulose, and lignin. The C: N ratio is very high in them making it pretty hard to be broken down by normal soil microorganisms. Due to the slow decomposition rates, these materials remain in the soil for long periods of time without any positive contribution to sustainability whatsoever.

Here we will focus on the different ways of effectively utilizing the unused corn stovers to reduce the wastage, generate extra income, and create sustainability.

Mushroom farming. This is one of the most lucrative businesses in the agriculture allied sector that can be undertaken alongside corn cultivation. In the US, the majority of mushroom production is carried out on sawdust or pellets due to its easier availability. The fact is, high-quality gourmet mushrooms like the oyster, milky, Volvariella, etc. could be easily grown using corn waste substrate. A thoroughly dried and chopped corn stover will provide the same kind of substrate nutrition as sawdust, if not more, for the fungi to colonize and produce mushrooms.

Composting. Thinking of how to manage the spent substrate after you harvest the mushroom? Well, toss it in a compost pit (both normal and vermicomposting will do!) or mulch it in the field. The spent substrate from mushroom cultivation is an excellent organic manure that has been enzymatically degraded by the mushroom fungi. Compared to the original corn waste, here the C: N ratio has been substantially brought down, making it easier for the soil microorganisms to act upon and release the nutrients. Besides, its usage also promotes various beneficial bacteria and fungi in the soil deemed essential for plant growth and health, which is an effective way to increase your farm's ROI.

Silage. Corn leaves if harvested at the proper time can be ensiled and preserved for long durations. These leaves make for excellent feed material with high digestibility and nutrients. They are particularly useful in times of winter when grazing systems are limited and fresh forage is hard to find. Large-scale ensilation is done in huge silos but can be performed in local conditions using plastic bags or drums as well.

Briquetting. The corn biomass such as stalks and husks can be ground and compressed into briquettes, which are an excellent source of energy. They can be used as fuel to power boilers, for the generation of electricity and general heating purposes. They are cleaner than fossil fuels such as charcoal and an excellent replacement of wood logs.

Biofuel. Sounds astounding, but it is true. Once a process where only corn grains could be used, now scientists from Michigan State University have come up with a solution to convert the corn biomass such as its leaves into biofuel. The process uses treatment with fungi and bacteria to breakdown the biomass and convert it into biofuels.

Bioplastics. This is another field of interest where the research is advancing. Bioplastics can be a boon to the world choked by non-biodegradable plastics. Corn biomass is an excellent source of cellulose that can be chemically modified into cellulose-bioplastics. They are biodegradable, low on carbon emissions, and put much less pressure on the environment.

Waste-to-wealth is an excellent idea for contributing towards a circular economy. The ideas listed above are just a few of the many ways to get started.

The United States is the largest producer of corn in the world. With production topping 345 million metric tons (2019 statistics from statista.com), corn has remained the backbone of American agriculture for decades. The majority of the crop is solely...