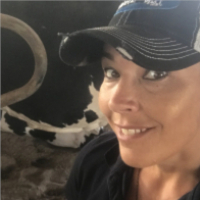 Core body temperature represents the temperature of the internal organs and tissue whereas peripheral temperature reflects the temperature of the skin, armpit, or mouth. The peripheral temperature is generally lower than the core temperature, so it is important to understand the differences between measurements. Under thermoneutral normal conditions (not too hot or too cold), the cow maintains an average core body temperature of 101.5°F (38.6°C). Body heat is naturally produced during the ruminal fermentation of feed consumed and tissue metabolism of nutrients absorbed to support normal body functions (heart beating, standing, walking, breathing, etc.) as well as milk synthesis and fetal development in pregnant animals. The cow also absorbs some heat directly from the sun and from her environment. Under thermoneutral conditions, the cow is able to get rid of excess heat when it is warm or retain more heat during cold weather to maintain body temperature.

The core body temperature in the cow is normally measured using a rectal thermometer, but the core temperature can also be measured in urine (midstream) and milk or at the tympanic membrane (ear canal). Rumen boluses can also be used to measure core temperature, but there is more variation in the reading depending on when a cow eats or drinks, so the average temperature should be used rather than a single time point measurement.

Core body temperature is one of the best indicators of heat stress. Heat stress is generally considered to begin when the temperature-humidity index [THI] is at 68 in most regions, but heat stress may begin at a lower THI in more temperate (northern) climates. During heat stress, the cow is not able to get rid of the excess heat generated or absorbed causing her core body temperature to increase. In response, the cow’s body adjusts to reduce the heat load by reducing intake and increased breathing rate, heart rate, sweating, and standing. Unlike humans, dairy cows do not sweat very much so this does not help much in terms of cooling. Blood flow to the extremities of the body increases to move heat away from the core tissues resulting in reduced blood flow (and nutrients) to the udder. Additional energy is used for breathing and standing further reducing nutrients available for milk synthesis. We are still learning about changes in endocrine and enzyme secretion employed to reduce the negative effect of heat stress.

Monitoring core temperature is one means of determining if a cow is suffering from heat stress and can also be used to evaluate the effectiveness of your heat abatement system. Because of individual variation, it is best to measure the temperature of 10 “normal” cows to determine the average temperature of the group.

KuhlerZ, Core Body Cooling gives farmers the ability to take temperature out of ...

Think about your most stressful day. Now imagine that day lasts for several mont...

How does KühlerZ offer Evaporative Cooling when the Humidity is High?

Have you ever experienced a day so humid that you find yourself dripping in swea...