#AgHistory Agriculture is about food, fuel, and fiber, and how these are critical to our society. In particular, this week I will share what I hope is an interesting history of hemp (fiber) and its history here in the United States. Note that our country still imports billions of dollars in hemp fiber each year (https://www.ers.usda.gov/webdocs/publications/41740/15867_ages001e_1_.pdf?v=0), and our U.S. Navy still uses this imported hemp rope, canvas and line. There are several synthetic products that have one or two superior qualities, but no synthetic possesses the 'whole package' - durable, salt water and UV resistant, rot resistant, breaking strength, etc. In fact, Purdue University has identified hemp fiber as potentially one crop that can 'save' American Agriculture as sustainable crop which is comparable to Sudan grass as a cover crop, as well as an alternate to other synthetic fibers. I happen to agree (https://hort.purdue.edu/newcrop/ncnu02/pdf/small.pdf). First, growing fiber for local use was common in England and it should be no surprise that hemp (fiber)was one of the first crops in New England, New York and Pennsylvania. One of the earliest laws of Connecticut required every family to raise half a pound of hemp or flax. The amount grown varied and was largely dependent on the ability of the population to prepare, spin, and weave fiber. In New England, the population was very reliant on cotton imported from the West Indies until the introduction of linen spinning wheel as well as the immigration of Scotch-Irish who were very skilled in linen spinning and the manufacture of linen, in the early 1700's. Lest one think this an easy process, please know that it is very labor intensive. In spite of this, New England farmers were bent on finding a staple that could be sold to a wide market. None the less, the volume of hemp necessary to sell to a wide market was never achieved and the crop failed as a staple as it had to compete with limited arable and cleared land being used to grow grain crops. It was noted in the book 'American Husbandry' (1775) "...it is not for want of good land in certain quantities, nor the climate, that prevents the export of hemp, but the demand for it in Philadelphia..." In 1840 most experts of the time believed that Kentucky and Missouri led hemp production with Indiana, Illinois, and Ohio following. Americans forget how reliant we are as a society on fiber, and this came into glaring focus when the Japanese invasions of the pacific islands during WWII blocked our traditional supply routes for fiber. Every hemp seed available in the U.S. was placed under armed guard in Kentucky as a national security and war effort concern. USDA Hemp for Victory - (https://youtu.be/bIxFhYVv_Gk). Additionally, every farmer should read the Purdue report and consider the impact of this commodity on our society. 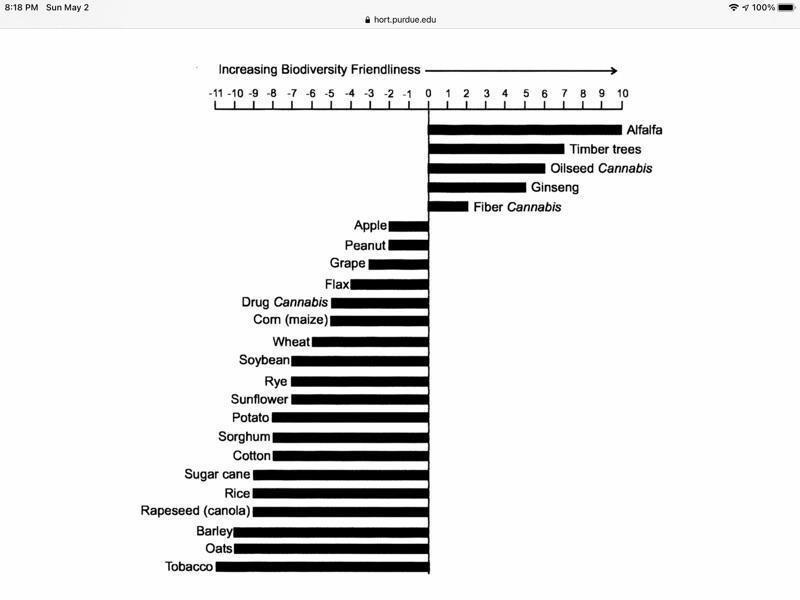