Mark Smith Cumberland City, TN
Feb 7, 2021
#AgHistory
A vast amount of agricultural history in the United States began outside of the United States. As you might expect, production agriculture for the Native Americans was very limited in scope and production(for many reasons). This being said, what is often overlooked in agricultural labor discussions here at home, is WHY men and women skilled in agriculture ventured to the New World in the first place, and why potential death and starvation looked more inviting to many than the situations left behind in their home countries. One book I highly recommend farm labor in general: Farm Labor in Germany, 1810-1945 by Dr. Frieda Wunderlich (1961). Dr. Wunderlich gives one example of a servant who was finally permitted to leave the farm and granted permission to migrate to Berlin. When asked to return to his previous lord of the land, he was then given permission to respond to his former “employer”: “...You and your sort are amazed that we run away. You gentlemen are responsible for it. We shall vote as the lord (landholder - where they migrated from) wants... read what the lord permits... keep our mouths shut about the suppression of the people... one has too much honor to allow one’s self to be treated like cattle.” It is important to understand that prior to the turn of the century in Germany, farm laborers were tied to the land and could never leave or change vocations without express permission of the ‘lord of the land’; neither could their children who were often born into this class. Even after migration to more urban dense areas in search of a better life, conditions were still identified as ‘miserable’ (but apparently better than where they came from). It is not hard to imagine industrious peoples choosing the unknown in the American, where they had control over their lives regardless of risk. From 1871 - 1900, 2.7 million Germans (predominantly rural “land folk”), emigrated to the United States. Dr. Wunderlich later identifies that ‘peasant’ children and farm workers were the most mobile of the rural population. An example of the life they chose (though from an earlier period) can be found in: History of Agriculture in the Northern United States, 1620-1860 first published 1925 and later updated in 1941. In one example, the months of May-July were particularly difficult resulting in near starvation, as no harvest had yet occurred. It would typically be corn planted by hand around trees or tree stumps (it could take 1 year to clear 1-3 acres). In one case, the nearest mill was 40 miles away and settlers would walk that on foot with a basket of corn on their backs. They may also use a samp mortar with a spring pole, and pound tolerable corn meal (one man per bushel/per day)... Our agriculture is founded in freedom over servitude. Samp mortars were stumps that had a bowl carved into them. A hardwood stump would be tied to a sapling and driven down into the bowl with corn, with the sapling aiding in raising the stump for the next blow. 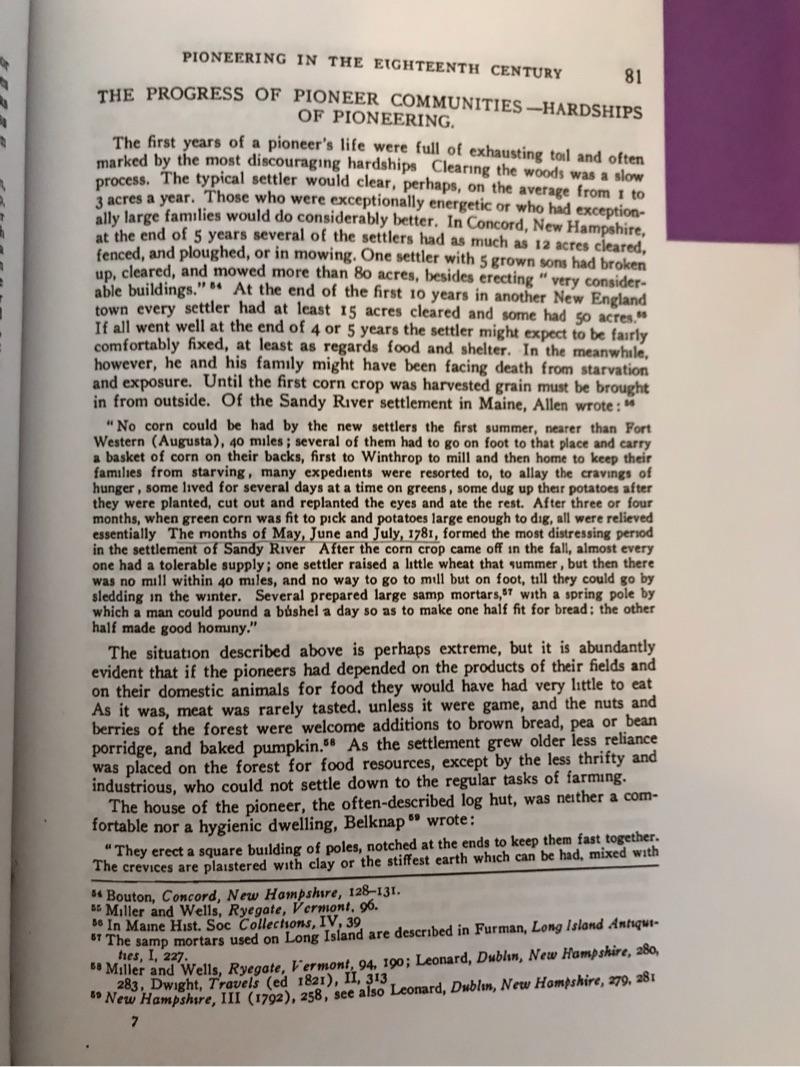