Mark Smith Cumberland City, TN
May 24, 2021
#AgHistory This is one I think you will find interesting - the history of transportation costs, and the impact of the Eerie Canal on wheat flour prices in New York. From 1800-1840, most roads to market were little more than tracks through the woods, where the trees had been cleared but the stumps, a foot to a foot and a half high, remained. Imagine hauling a loaded wagon over this! Henry Carter Adams (Professor of economics at University of Michigan) wrote in 1899, it would take two ox teams 3 days to travel 25 miles. In Indiana, it cost 50 cents for every 100 pounds, per each 20 miles traveled. At these rates, corn could not be shipped more than 20 miles before it was grown at a loss. Wheat could not be profitably transported more than 50-75 miles. In 1825 things began to change with the opening of the Eerie canal. According to Israel D. Andrews in a report to the Secretary of the Treasury on the 'Trade of the Great Lakes and Rivers' "Previous to the opening of the canal, transportation from Lake Eerie to tide-water was such as to prevent all movement of merchandise" "The cost to transport from Buffalo to New York was $100/ton and took about 20 days at a cost of nearly 3 times the market value of wheat in New York, 6 times the value of corn, 12 times the value of oats", and far exceeded the value of most cured provisions. Because of the Eerie canal, western wheat was being used in New England by both farmers and 'city folks'. David Field, a historian for Berkshire County, Massachusetts, recorded in 1829 that the local cultivation of wheat and rye had diminished with the opening the Eerie canal, with more wheat being transported at cheaper cost into the county than what could be grown and transported out of it. Clearly, the market value of any agricultural commodity, and its availability to consumers, will always have transportation costs imbedded into the market value. As was demonstrated with cereal grains in New England, history shows us that when transportation costs exceed market value, then that commodity will eventually disappear form the market, or will never arrive in the first place. The New England Farmer printed in 1838-39 "If more fertile regions can supply our cities with grain at a cheaper rate than we can, let us not lament. We shall find full employment in furnishing what cannot be so well transported from a distance. Fresh meats, butter, hay and the small market vegetables must be supplied by the farmers of New England." 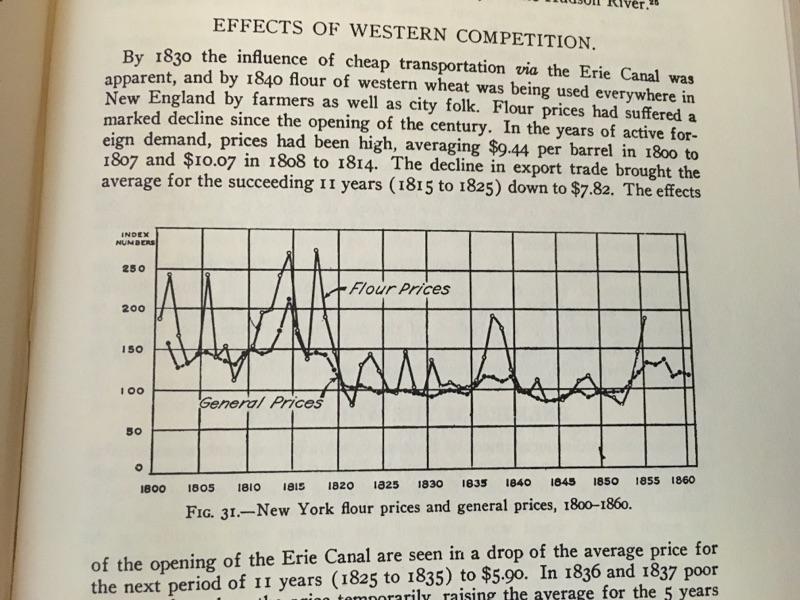